Lloyd: The Inc.'s No. 1 Crooner Gets Street Love 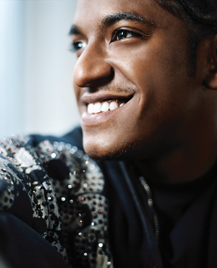 It's the Tuesday before Valentine's Day 2007, and Lloyd is beaming. He's on set at the all-day shoot for his next single, “Get It Shawty,” down in L.A.'s Sepulveda Basin, the same spot where Grease's car race scene was filmed.

Directed by Erik White, who also shot “Hey Young Girl” from Lloyd's debut album, Southside , “Get It Shawty” features motorcycle stunt riders, skateboard kids, rollerbladers and people willing to risk it all to have fun, because according to Lloyd, that's what it's all about. Dancers and models – both male and female – and vintage cars are also present, as is the ever-controversial Irv Gotti, CEO of The Inc., Lloyd's label.

At age 18, Lloyd made his R&B mark with the hit “Southside” featuring Ashanti. He followed it up with another smash, “Hey Young Girl.”

Three years, and a handful of trials (literally) and tribulations later, and Lloyd's back on the charts with the No. 1 hit “You” with Lil' Wayne. Though it only took him two months to record his latest album, Street Love, he's been busy touring, creating and maintaining new business relationships and guesting on hip-hop projects from Young Jeezy, Rick Ross, Lil Scrappy, Eightball & MJG, Fabolous, DJ Drama and DJ Khaled, to name a few.

“I was just trying to keep my name out there,” he relays. “Keep my sound relevant.”

Scanning his resume, it would seem that Lloyd's been lucky. Yet read between the lines and the years of hard work are revealed.

“I'm about the dirty work,” he reveals. At the barely legal age of 21, the New Orleans-born, Atlanta-raised singer has been on his grind since he signed his first record deal when he was 10.

It all started for Lloyd as a kid attending performing arts elementary school. At 10, he was drafted into a group called N-Toon, which signed a recording contract with Warner Bros.

“When I first signed this deal I cried tears of joy,” shares Lloyd. “Because I felt like my dreams were unfolding before my very own eyes. I could see it happening.”

“I was faced with my first speed bump in the road to success, which was, do you want to call it quits now or keep pushing?” Lloyd continues: “For me, my love for music was too strong to just let it go.”

Lloyd traveled to New York, auditioned for every major label and at 15, signed with the Magic Johnson Music Group, home to R&B star Avant. He thrived at the small label, creating most of the music for what would later be released on Southside .

He wrote “Hey Young Girl” at Robin Thicke's house, who at the time was an aspiring singer. The catchy ditty would later seal his record deal with The Inc.

Then Magic's label folded, and Lloyd was faced with the second speed bump in the road to success, which was, he was back to square one – again, so does he keep pushing or call it quits?

“My greatest fear has always been to grow older and to look back on my life and to think about what I would've, should've, could've done,” he explains. “To not be able to fulfill my personal obligations and achieve the goals that I set for myself very early. No matter what kind of curve ball was thrown my way, I was going to swing, even if I miss. I got to put forth the effort.”

After the Magic was gone, Lloyd returned to New York once again upon the invitation of L.A. Reid. A chance encounter with Irv Gotti, however, would alter his destiny. Lloyd played “Hey Young Girl” for Irv, who listened to it six times back to back and then offered him a deal on the spot.

But Lloyd, being an honorable dude kept his prior commitment to meet with L.A., who also offered the singer a deal. Ultimately, Lloyd opted for Irv.

“I felt like I would have a chance to grow into who I am now,” he reasons. “There weren't a lot of people crowding my space. It was an open lane.”

Spend the day with Lloyd, and it's easy to see why Magic, L.A., Irv, Jazze Pha (Lloyd is also signed to Sho'nuff Records) and plenty others love working with him.

“My mom would always tell me that my biggest downfall is my big heart. And I'd say that's what separates me from everyone. In today's industry, I watch my peers destroy my peers, and I feel like if only we had a little bit more love, we could all succeed together,” he says.

Lloyd has accomplished much in his young career. In addition to writing hits and performing them in front of swooning crowds, he executive-produced Street Love and signed himself as an artist to his own company, Young Goldie Music.

“I hope people realize that I'm here for a reason,” he says. “There's no luck. It's hard work, and I hope it shows and translates through my music. With this album, I want people to understand that I am capable of taking it there.”