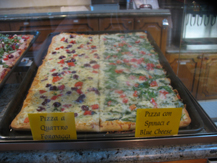 Pizza Rustica was founded 10 years ago in South Beach, Fla. After becoming a mainstay of the South Florida pizza scene, the restaurant expanded nationally. They have recently added three locations in Southern California: Beverly Hills, West Hollywood and Sherman Oaks, with a location coming soon to downtown.

Pizza Rustica imports their recipes from Rome and bakes their pizzas in classic wood burning ovens. Their claim to fame is that they sell gourmet pizza at affordable prices.

I liked the sound of that. But would I like the taste of it?

One thing I liked was the selection of pizza toppings. For those who like vegetables, there are usually only a handful of ingredients to choose from. Not here.

They offer everything from roasted peppers and yellow squash to zucchini and kalamata olives. Not only those, but instead of offering just mushrooms, you have your choice of portobello, shiitake and porcini.

Don't worry meat lovers, the menu features a wide variety of those toppings as well. Not only can you get regular chicken breast, you also have a choice of barbecue chicken, Chicken Fritte and Chicken Fiorentina. Plus, how many restaurants offer imported prosciutto as a pizza topping?

Of course, you can't have pizza without the crust. Pizza Rustica uses a blend of herbs and extra virgin olive oil that makes the crust tastier than most.

Some of you who throw the crusts away might want to think twice about that here. Pizza Rustica offers a whole wheat crust that is just as tasty as the original, but healthier.

Cheesy has become an insult in today's vernacular, but it's a good thing at Pizza Rustica. You can make your pizza to order with your choice of asiago, buffalo mozzarella, gorgonzola, mozzarella, parmegiano and provolone.

Not in the mood for pizza? No problem. They also offer a wide variety of sandwiches, pastas and salads, not to mention a breakfast menu for the early birds.

Though they don't have a salad bar, you can create your own salad with over 20 ingredients to choose from. If you have a sweet tooth, Pizza Rustica offers a chocolate pizza made with imported hazelnut chocolate. Other desserts vary depending on availability, but they include tiramisu, Italian cheesecake and chocolate mousse cake.

My friend Bryeon and I each started off with a salad. I ordered the South Beach Salad, which consists of baby greens, albacore tuna, spinach, basil, kalamata olives and hardboiled eggs with a balsamic vinaigrette. The vinaigrette was slightly sweet, which was a good combination with the olives and helped the flavors of each stand out.

Since the name of the restaurant is PIZZA Rustica, we sampled four different kinds of pizza. We tried one of the “Cheese Lovers” pizzas, the Pizza a Quattro Formaggi. This is a white pizza with a four-cheese blend of asiago, gorgonzola, provolone and mozzarella, along with tomatoes and spinach.

We tried two varieties of the vegetable pizza, the Pizza con Vegetable and The Mediterranean, both of which were made with wholewheat crust. The Pizza con Vegetable is made with roasted eggplant, zucchini, squash, tomatoes, red onions, roasted peppers, rosemary and black pepper. The Mediterranean is a house creation featuring pesto, roasted eggplant garlic, tomatoes, kalamata olives, basil and goat cheese.

From the “Special” pizzas, we chose the BBQ Chicken pizza, which also includes red onions and roasted peppers with mozzarella.

Each of us liked both of the crust. Bryeon, in particular, was in love with the wholewheat crust.

While there wasn't a weak link, my hands-down favorite was the white pizza. Though I'm partial to white pizza anyways, the combination of the crust and cheeses melts in your mouth.

Bryeon's favorite was the Pizza con Vegetable. Besides having the wholewheat crust, he was impressed with the wide variety of roasted vegetables.

I did like the barbecue sauce since it was both sweet and tangy, so it helped bring out the flavor of the chicken, onions and peppers. As for The Mediterranean, Bryeon was thrown by the fresh cut basil on top at first, but he finished it off.

Overall, the thing I was most impressed with was the use of roasted vegetables. I think roasting enhances the flavor of vegetables and really adds to the overall flavor of the pizza.

Bryeon was most impressed with the wholewheat crust, which is often cardboard-like. This crust was actually moist and flavorful.

The other thing we both liked was the size of the slices. They are bigger and way more filling than your normal slice from a pizzeria. We tried to finish off the four slices, but we came up a little short.

That being said, we still managed to eat a slice of the chocolate pizza. Like the white pizza, the chocolate pizza melts in your mouth. Bryeon insisted that he was only going to eat one bite, but after that first bite, he ended up having a few more.

While I liked everything, Bryeon said it was by far the best pizza he's ever eaten in Los Angeles. It's safe to say we'll both go back.

It's also safe to say we'll probably go back for their happy hour. Every day from 5 to 7 p.m., if you buy a slice of pizza, you get two beers for the price of one. And who doesn't like free beer?