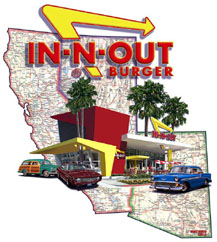 The minimal, six-item menu found In-N-Out restaurants is a rare and curious thing in the world of fast food. Larger franchises tend to have endless lists of burgers, sandwiches and side items, leaving the consumer perplexed at what the restaurant actually specializes in. At In-N-Out, they specialize in hamburgers; the actual selection being a slightly wider variety than the deceptively simple menu suggests.

The In-N-Out "secret" menu is not much of a secret anymore for California locals. Over the years, Angelenos have discovered that in addition to the classic hamburgers, cheeseburgers and Double-Doubles, there are quite a few notable variations available.

Rumor has it that the largest burger ever ordered – not surprisingly, by a fraternity – was a 500x500. It is unconfirmed whether the mega-order was ever met.

For those Atkins diet fanatics, there’s even a "Protein Style" burger that replaces the bun with large lettuce leaves. On that note, vegetarians and vegans have the "Grilled Cheese" and the "Veggie Burger," which have all the fixings of a cheeseburger or hamburger but without the meat.

Some of the more bizarre orders include the "Flying Dutchman" and "On the Sal." Two meat patties with two slices of melted cheese sitting in the wrapper is a "Flying Dutchman," which is commonly ordered for pets. "On the Sal" is simply lettuce and dressing – there’s really no logical excuse for this one.

If you order an "Extra Toast" burger, you’ll have your buns on the grill a little longer, giving them a bit more of a crunch. On top of that, fries can also be ordered "Well Done" or "Light" depending on how crispy you like them. And though it can prove to be quite messy, you can even get your fries "Animal Style."

In-And-Out proves you can design your order around your own personal tastes, and your order will be served.

As a regular In-N-Out customer, you may have also noticed the subtle Bible verse references mysteriously printed on the packaging. These include Revelation 3:20 on the burger and cheeseburger wrappers, John 3:16 on the bottom lip of soda cups, Proverbs 3:5 on milkshakes, and Nahum 1:7 on the Double-Double wrapper.

These negligible notations have erupted into curious chatter among In-N-Out devotees. Rumors range from the food chain being owned by a Christian sect to proverbs being some morbid reference to the death of the owners’ son Richard Snyder in a 1993 plane crash. Although In-N-Out has denied most of these "theories," the hamburger restaurants undeniably have Christian roots.

Founded by Harry and Esther Snyder in 1948, In-N-Out has always been privately owned. The family has complete control over what they have on their product packaging, and with that right, they have chosen to include Bible verses.

There are entire Web sites devoted to In-N-Out’s secret menus and rumors – the little things that endlessly fascinate the restaurant chain’s loyal customers. Even the official Web site acknowledges the inside buzz with a brief explanation of the not-so-secret food codes.

Though Southern California is the birthplace of In-N-Out, the chain is constantly growing, nearing the 200 mark with locations in Nevada and Arizona. It has arguably become the quintessential Californian hamburger, attracting tourists who are unaware of the myriad of off-menu items. But that’s what makes it so special, keeping it our little secret.