Shia LaBeouf: Takes us on a Trip to Disturbia 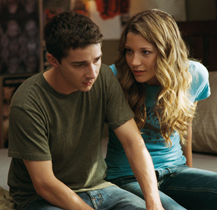 Shia LaBeouf is a very confident young actor, and for good reason. At 20, LaBeouf has already amassed a huge body of work. Constantine , opposite Keanu Reeves, Holes with Sigourney Weaver and Charlie's Angeles: Full Throttle , just to name a few. Most would recognize him from the five years he starred in Disney Channel's “Even Stevens.”

LaBeouf first caught my attention in the underrated I Robot (2004). LaBeouf will soon return to a sci-fi special effects spectacle in the upcoming Transformers , directed by action maestro Michael Bay.

In person, LaBeouf is unassuming. He seems like your average college-age kid. He smiles a lot. He also drops the f-bomb as casually as a sailor on shore leave. His confidence borders on cockiness, but behind all that boisterous, barely-past-teen bravado, LaBeouf has big, kind, expressive eyes.

Eyes apparently made for spying on the neighbors. Or at least that is what the filmmakers of Disturbia would have us believe.

After punching out his teacher, he is stuck at home on house arrest, complete with a GPS tracking anklet, which will alert the cops if he wanders more than 100 feet from the domicile. In his defense, Kale has had a rough go of it.

His dad was killed in a car crash a year ago. His well-meaning but doting mom (Carrie-Anne Moss) gets on his nerves. So, yeah he does spy, and it's creepy; but what the hell? He's bored.

Kale and his partner in crime, Ronnie (Aaron Yoo), get caught in the act peeping at the lovely Ashley (Roemer). It seems director D.J. Caruso ( The Salton Sea ) had just as much fun playing the voyeur; as his camera took in many provocative shots of Roemer, especially emphasizing her perfectly formed glutes.

“I would never sign on for a normal ‘teen thriller.' This movie leaves room for the imagination to mind-fuck you,” continues LaBeouf.

It turns out Ashley doesn't mind the boys' attention. Instead of objecting, she ends up joining in on the spying. It's all good fun until the kids realize there is something deadly going on with one enigmatic neighbor: the mysterious Mr. Turner, played by the indelible David Morse.

LaBeouf has benefited from working with some of Hollywood's best talent; but he says starring opposite Morse was unforgettable. “David Morse is one of the finest character actors we have working today. He is so focused, it's scary.”

LaBeouf says Morse was so focused, it was unnerving. “He never talked to me or Sarah during the filming, which really added to the tension. By the end of the film, I really did want to fight him.”

There is an incredible climactic fight scene. In fact, it's perhaps the most effectively staged fight scene I've ever seen in any film. Morse actually broke three fingers filming that fight scene. It's very intense.

After seeing Moss kick so much ass as Trinity in The Matrix , watching her play the damsel-in-distress mommy takes some getting used to. Still, she manages to infuse genuine warmth and sincerity into the role. Since she is a new mom in real life, I'm sure some of that motherly love naturally transfers onto the celluloid.

Disturbia really is LaBeouf's movie though. Caruso says he made the right choice in casting the young star: “Shia is so real. Much of the dialogue he improvised for realism. We are seeing a changing of the guard here in the future of acting.”

Yoo says LaBeouf really pushed him to his best performance. “He was so prepared. I had to take the script home at night and really work with it, determined to be just as prepared. Still, he ended up blowing me away every time.”

Caruso compares LaBeouf to a young John Cusack. I agree. We should continue to expect great things from this fine young actor.