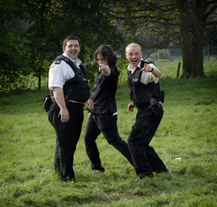 The iconography of British crime films has been a bit one sided. From The Long Good Friday to the very recent Layer Cake , gangster films have been the norm. There are very few British cop films that portray the uniformed police with the same machismo and flare of their violent counterparts.

Much of it may have to do with two glaring characteristics: they don't carry any weapons, and they wear silly hats. This month, director Edgar Wright and actors Simon Pegg and Nick Frost, the team that brought you the “zombie rom-com” Shaun of the Dead , present Hot Fuzz , an action extravaganza straight out of Hollywood, but transfixed within the rural countryside of England.

“There hasn't been a film with cops in the lead for 30 years, and even before that there's only a handful,” Wright says about the stagnant British cop genre. “I was getting tired of the gangster genre and also filmmakers glamorizing it. The London in Snatch doesn't exist. We wanted to do an answer to the wave of gangster films.”

Reporting for duty is Sgt. Nicholas Angel played by Pegg, who also co-wrote the script with Wright. About facing from his portrayal of the slacker, electronic store manager Shaun in Shaun of the Dead, Pegg plays a hardnosed cop proficiently trained in such skills as hand to hand combat and high speed pursuit. He's a combination of Dirty Harry and the T-1000 liquid assassin played by Robert Patrick in Terminator 2: Judgment Day .

“That was a definite influence,” Pegg says. “The T-1000, just because he's so motivated. Angel is like an automaton in the beginning of the film. He's like inhuman because he's so serious and so dedicated that it's not until he meets Danny that he becomes a human being. Danny turns him into a real boy. It's like Pinocchio, but serious.”

With an arrest rate 400 percent higher than most of his fellow officers on the force, Angel is transported to the sleepy village of Sandford, where he's partnered with the loveable, action film connoisseur Danny Butterman, played by Nick Frost. Because Sandford is described as statistically the safest village in the country, where the most important duty of an officer is to find the town swan, Angel must now face a rather mundane life. But after a few uncharacteristic accidents rock the town (including one that will be remembered as one of the best death scenes of 2007), Angel, with Butterman by his side, is on the case.

“It's almost a tribute to brainless cinema,” Wright says when talking about Hot Fuzz . “I love cerebral films. I like art house films, and I like classics. But I can enjoy and appreciate dumber films. Both Bad Boys II and Point Break are the pinnacles of dumb, popcorn fun, and there's absolutely nothing wrong with that. It's the cinematic equivalent of keeping a balanced diet: you should eat healthy, and you should eat five servings of fruit and vegetables, but every now and again it's OK to eat a cheeseburger and not feel guilty about it.”

For Pegg, it was a dream to work with such great actors. Playing opposite the former 007 (Dalton) and Sgt. Howie from the cult classic The Wicker Man (Woodward) meant it would be especially hard for him not to unleash his inner nerd.

“It was a daily struggle for me, not geeking out,” he explains. “It was quite amazing. We were lucky to get those actors. We never would've got them if this had been our first film. We got pretty much every single person we wanted.”

Behind the camera, Wright took great joy in seeing generations of English actors working together on the same set.

Frost took his experience working with Broadbent as one of the ultimate film lessons.

“I've always loved Jim Broadbent,” he says. “He's a smart, funny guy. He's very down to earth, very modest. I was just kind of gravitating towards him, wanting to be in his company and wanting him to like me. What I learned from him is he's like us; he's an actor through and through. It's not like you get to a certain age or a certain level or you've won a certain amount of awards, and you no longer have to learn lines. He would come on set, be prompt, very polite, very funny, and he would have his script with him. He'd be refreshing his mind right up to when the camera would start turning. Just watching him and how he works, there's a reason that he's as good as he is.”

The adoration between cast members, cast members and crew and, in particular, the love shared by Wright, Pegg and Frost – who have worked with each other for many years – stretches miles away.

“All buddy films are essentially homoerotic, particularly Lethal Weapon , Point Break , and even Bad Boys II ,” Wright says. “Buddy films are like male romantic comedies. You have the same beats in 48 Hours or Lethal Weapon as you do in Bringing Up Baby or It Happened One Night . It's the same thing: two people thrown together, they hate each other, but by the end they kind of love each other. What we wanted to do with Hot Fuzz was make it quite affectionate and real. It's almost like a platonic romantic comedy.”

From George Romero to Richard Curtis and now John Woo, Pegg and Wright are genre-defying collaborators who fondly pay homage to some of their favorite filmmakers while creating something that is uniquely their own style and sensibility. It's a gift that will live on in their third film. Details are sketchy, but fans expecting the same amount of blood spilling and ice cream eating as seen in Hot Fuzz will be incredibly pleased.

Interviews
James Bond producer: 007 ‘can be of any color’ but never a woman
247 views