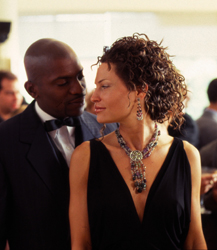 Eat your heart out, boys. Not only is Jolene Blalock your favorite Stuff and Maxim hottie, she played a commander on “Enterprise” and actually likes the show.

After a worldwide stint as a model with a burgeoning commercial career and consistently appearing on television shows like “CSI” and “Stargate SG-1,” Blalock makes the jump to feature length films with steadfast grace and dedication in Slow Burn .

For the past eight years, Blalock has worked hard to establish a life in Los Angeles, now referring to it as her “home with a capital H;” but it hasn't always been that way.

Before she could even vote, Blalock was touring Europe, Asia and the rest of the continental U.S. modeling to pay her bills, while cashing in on a free world tour. Although she constantly refers to her successes as pure luck and never undercuts the opportunities that modeling provided her, she recognizes modeling as one-dimensional and only a means to an end.

On an uncharacteristic break from work in 1998, Blalock came to L.A. to visit a friend and never left. Hooked by “Enterprise” in 2000, Blalock is now witnessing the theatrical release of her first starring role in a feature film.

Slow Burn marks four years of changing release dates tempered by marketing restrictions and timing conflicts, a surprising slowdown after its appearance at the Toronto film festival in 2005. Featuring Blalock as a contemporary femme fatale in this sexually tinted noir thriller, she assumes the role of Nora Timmer among a cast including Ray Liotta, Mekhi Phifer, LL Cool J and Taye Diggs.

The story further unravels as Cole takes charge of a time sensitive situation in an attempt to sort fiction from truth. With every addition of characters comes an increasingly convoluted version of reality.

Blalock spent three months on the set of Slow Burn while simultaneously filming “Enterprise,” a true testament to her proclamation that she's never been afraid to be far away and work long hours. Her schedule unfolded as such: Monday through Wednesday Blalock was in Los Angeles as the Commander in “Enterprise,” beginning her work day no later than 5 a.m. Wednesday night, a red-eye plane from L.A. to Montreal turned the Commander into Nora Timmer.

Working on Slow Burn from Thursday to Saturday in Canada, Blalock returned to L.A. on Sunday only to begin this cycle again. For three months.

“It was amazing to see the sunrise in L.A. and the sunset in Montreal, while catching winks of sleep on my dinner tray,” Blalock points out.

Raving about the production, Blalock's voice croons in adoration when prodded about Liotta. “He's a man's man and an actor's actor,” she raves. “He loves beer, football, Shakespeare and strippers, and has a great sense of humor.”

It comes as no surprise then that Blalock's favorite scene is an intimately intellectual one between her character Timmer and Cole as they discuss society's metaphorical masks.

“Making mistakes in your living room is one thing,” she relays. “But now mine are done in front of a wide scale audience, and that fear of failing becomes embarrassment.”

Yet most impressively, these fears do not stop Blalock as she brushes off my recall of her past achievements and buries her head in her work. She continues to progress with the completion of two more feature length thrillers, Shadow Puppets and First Fear .

Developing a tendency towards sexy thrillers, Blalock defends her decisions as thinking on a micro, not macro scale. “I accept films based on intriguing or complex character roles, not categorizing genres,” she says.

Slow Burn hits theaters this week, and Blalock will continue on her path of progression: “Reaching a Zen of letting go, feeling OK with dissatisfaction and rising to the occasion. It all sounds very dark, but it's actually quite wonderful.”