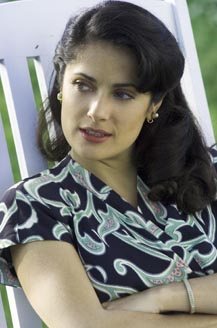 Based on the real-life 1940s murder spree of Martha Beck and Ray Fernandez, Lonely Hearts is nothing more than a poor adaptation of Leonard Kastle's far superior The Honeymoon Killers (1970).

Fernandez (Jared Leto) is a sleazy conman making his way through life by seducing and swindling lonely, often wealthy, women. Enter Beck (Salma Hayek), an overweight (although not so depicted in this film), slovenly and mentally disturbed woman with a penchant for obsessive, kinky sex and love of money that rivals that of Fernandez – turning his potential mark into his partner.

Taking money, jewels, savings and anything else they can get their hands on, the duo ends each con by murdering the woman in what investigative evidence determines to be a bloodied sexual frenzy.

John Travolta (Detective Elmer Robinson) and James Gandolfini (Charles Hildebrant) unsuccessfully take on the roles of the cops on the case. Likewise, as Fernandez, Leto fails miserably as the Latin lover.

One joy is Hayek. Although the complete opposite of the real Martha Beck, Hayek is psychologically compelling with alluring perfection personified.

Written and directed by Todd Robinson, the grandson of Detective Elmer Robinson, one would expect the guy to have stayed true to his grandfather's legacy and not manufacture unresolved plot points or stilt the characters' personalities.

Robinson structures Lonely Hearts so as to give the detectives equal time and a louder voice than the killers, which is a saving grace to the film. Unfortunately, he fails to give any voice or compassion to the victims.

Visually the film is stunning. Adding to the look is the impeccable production design of Jon Gary Steele who captures the very essence of '40s New York.