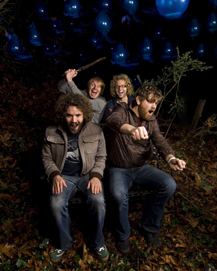 Stuck in a tour van for hours and asked to describe themselves – an undoubtedly silly request on my part, I have to admit – California's own Sherwood could only think of one word: “bombastic.”

The high-energy image evoked by this word seems quite appropriate to the band's story.

The pop rock foursome – Nate Henry on vocals and bass, Dan Koch on guitar and vocals, Mike Leibovich on keyboard and percussion and Joe Greenetz on drums – got its start playing together while in college at Cal Poly, San Luis Obispo. Henry, who was a recreation administration major at the time, started the band for class credit.

Since then, Sherwood has received quite a bit of attention, after signing with MySpace Records and recording two albums. The band's newly released album, A Different Light , was written when its members secluded themselves on a beachfront in Mexico to “get out of their hometown, and even the country.”

Sherwood's music is a mix of happy, traditional pop rock that harkens back to the '60s, capturing the same joyous energy of the time, yet infusing it with a definitive modern sound. The band's songs border slightly on guilty pleasures, with heavy vintage pop influences overwhelmingly evident, especially in tracks like “Alive,” in which the backing vocals strongly resemble the surf rock bands of the '60s and '70s.

There are distinctly modern songs included on the new album as well, among them “Middle of the Night,” which is a danceable, vaguely electro, definitively indie-rock vibed track.

“As far as image and aesthetics go, we for the most part, have been a very summertime, happy, sunshine, beaches, insert-positive-image-here kind of band, both visually and attitude-wise,” Greenetz says. “Our band takes a lot of influence from the Beach Boys. In general, we're all just pretty optimistic people. We've never had tragic lives.

“We all come from lower-to-upper middle class homes. We all have fully functional families that love and support us. It's not depressing or dissonant music. We're a very upbeat, positive-sounding band.”

With the way the music industry is now, it's surprising to see a band so unabashedly happy and staunchly undamaged. Not only that, but they haven't forgotten the do-it-yourself attitude they've become known for, either.

“If we wanted something done right and on time, we've always had to do it ourselves. We've tried various managers, and none of them seemed to work out. It's a little tiring at times; we're on tour half the year and the other half we're at home doing e-mail and MySpace-ing. We enjoy being in the band, and it's our little project that's been going on for four years now. We love it for various reasons, and we're a fine example of the DIY ethic,” states Greenetz.

That DIY ethic has pushed the band through selling records at malls, doing their own marketing and even having to deal with some shady industry people. Relating a story about one of these less-than-stellar encounters, Greenetz reminisces: “We're playing a show in Bakersfield. Not only is the promoter not there, but there are rumors he's in prison, and his pregnant wife is taking over for him.” I could hear the band laugh in the background.

More recently, Sherwood has embarked on a tour with Mae and Relient K. “The tour is incredible,” gushes Greenetz. “It is, by far, the biggest tour we've ever been on, and it's a lot of work, but the shows are so crazy. It's kind of surreal getting onstage and playing in front of so many people.”

Despite their overwhelming success, the band still seems to be reeling from it all.

“I get on stage, and I don't feel like I'm the person really there playing,” Greenetz laughs. “It feels like I'm on stage and watching a DVD.”

Not only is the band down-to-earth and loveable, but – to add to that obnoxious list of good qualities – they care about something bigger, too. “On a more moral basis,” Greenetz shares, “we try to support a lot of causes. On this tour, we're working with an organization called Blood: Water Mission. We're collecting donations at our merch booth, and at the end of our tour, we're going to dig wells in Africa. We play pop songs for a living, but we're trying to accomplish more important things in life than songs, and it's important for people to be a part of this.”

With all that's been going on with these guys and everything they represent, “bombastic” seems to be the right word.

A Different Light is currently available. Sherwood will perform April 13 at the Avalon in Hollywood. For more information, visit www.myspace.com/sherwood.