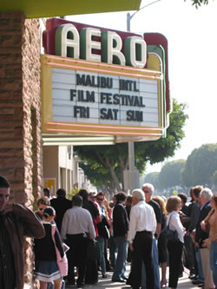 Right in our very own backyard, Malibu is honoring the power of independent films and their filmmakers. The 2007 Malibu International Film Festival will present over 50 films to more than 10,000 festival cinephiles.

Each film was hand picked by the festival jury from over 2,000 entries submitted directly by the filmmakers. Mo , a film directed by Brian Lederman, is being honored as one of the Festival's Centerpiece Films (Sat, 7:30 p.m.).

“We feel that Mo is consistent with the mission of the festival,” says David Katz, Festival Producer. “It is a unique and compelling story told in a way that everyone can relate to.”

Additionally, the festival will screen the world premiere of Gideon Raff's directorial debut The Killing Floor (Sat, 9:30 p.m.) as the Festival's succeeding Centerpiece Film. “ The Killing Floor hits every aspect you look for in a thriller,” Katz adds.

The Festival kicks off with a celebratory Opening Night party at the Writers Boot Camp, located in the Bergamont Station Arts Center featuring DJ Jason Bentley of KCRW (9:30 p.m.; $20). Complimentary beer, wine, spirits and hors d'oeuvres will be provided. It wraps up with the Geoffrey's Malibu Awards Night Dinner Party (6 p.m.; $100).

Also, you can join Writers Boot Camp founder Jeffrey Gordon for a Mini-Camp: a candid, comprehensive discussion on commonly held fallacies about writing for film and television. It's free and helpful for writers of all levels and genres. Mini-Camp will be held Sunday, April 15 at 10 a.m. at Aero Theater.