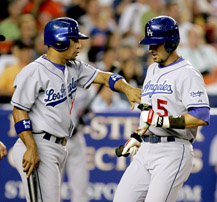 In our new baseball season, the Los Angeles Dodgers are considered one of the teams to beat in the National League. As a recap from last season, the Dodgers finished tied for first place with the San Diego Padres at 88-74. This helped the boys in blue get into the post-season, playing and eventually losing to the New York Mets.

Today, with the mixed roster of young players and veteran leadership, most experts are picking the team to repeat as the N.L. West division winner. The Dodgers are still relatively young, but it's been the off-season moves that make them a threat to take out the Padres completely and win the N.L. West outright.

They're coming in this year with three fresh faces that have all Dodger fans excited. They have a payroll currently at $115 million, but Jason Schmidt, Juan Pierre and Luis Gonzalez are pieces that are definitely considered worth their contract value. These players, along with those returning from last year, like Nomar Garciaparra, Jeff Kent, Rafael Furcal and defined closer Takashi Saito, make the Dodgers sure to be recognized as a secured post-season team.

A major free agent steal from the off-season is former San Francisco Giants pitching ace, Schmidt. He has consistently won games in the N.L., at least 11 since 2002, with his biggest seasons being '03 and '04 (winning 17 and 18 games). Although he has not been as dominant in recent years, Schmidt still has the respect of his pitching peers and around the league as a quality, first-tier starter.

With Schmidt being in Dodger blue, he strengthens the pitching staff that was pretty good last year. The Dodgers return with an already productive starting rotation that includes Derek Lowe, Brad Penny, Randy Wolf and Brett Tomko.

This is one of the Major League's most complete starting rotations based upon veteran leadership and amount of innings pitched. Last year, Schmidt had 213 total innings with 11 wins, Lowe had 218 innings with 16 wins and Penny had 189 innings with 16 wins. Wolf and Tomko have great potential to complement these guys.

The team sought out a closer who could stay healthy and found Saito, who did a great job. He came in after the All-Star break and had a 6-2 record with a 2.07 ERA and 24 saves in 26 opportunities.

A newcomer to the team that already has established credibility and respect throughout the league from past years is Pierre. He is one of the most exciting base running lead-off hitters in the game and played in all 162 games for the Chicago Cubs last season. He ended up with a .292 batting average, a .330 on-base percentage and 58 stolen bases to name a few statistics that will help the Dodgers this season.

Another new player and bright spot in the OF is Gonzalez, coming in from Arizona as a free agent. Playing in 155 games last year, he is best known for his contact hitting expertise.

Gonzalez batted .271 with 159 hits (52 of those being doubles), 73 RBI's and scored 93 times. As one of the veteran additions to the Dodgers this season, he has other sports minds thinking the team will go deep into the playoffs this year.

In terms of hitting, L.A. has a good line-up of speed and contact hitters from the veterans. There is no legit power threat, unless you count the NL Comeback Player of the Year, Garciaparra or Kent and maybe Andre Ethier.

Having Pierre, Furcal, Gonzalez and Garciaparra in the line-up can lead to runs just by producing quality at bats and speed to manufacture runs. If either Pierre or Furcal get on base, it gives Gonzalez, Garciaparra or Kent a chance to get the runners advanced with their strong contact hitting.

The latest moves for the Dodgers to begin the season are somewhat normal with nagging injuries and a small trade. The injuries are to LF-Jason Repko (torn hamstring tendons – out for season), P- Yhency Brazoban ( recovering from right elbow surgery) , P-Hong-Chih Kuo ( left shoulder inflammation) and SS-Furcal ( sprained left ankle ) .

Each player is on the 15-day disabled list and can return except Repko. Since Repko is out for the year, the Dodgers traded relief pitcher Elmer Dessens to the Milwaukee Brewers for OF Brady Clark. This gives them another option for a right-handed hitter who can play all OF positions.

Season Prediction: 1st Place in NL West with a 90-72 record. They could represent the National League in the World Series and lose to either the Detroit Tigers or the Boston Red Sox.