Lee Jaffe: On the Road With Jean-Michel Basquiat: 1983 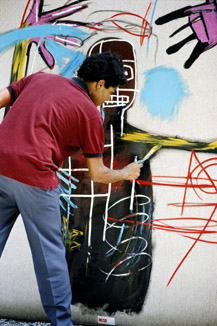 Walking around Hollywood's quaint Shooting Gallery, gazing at multimedia artist Lee Jaffe's up close and personal photos of Jean-Michel Basquiat at work, you get a sense of what the graffiti and neo-expressionist artist was like. Or maybe you just think you do.

Either way, Basquiat appears playful, loving, warm, mischievous and troubled – all at once. He's attractive, young and at the height of his creative career.

There are close-ups of Basquiat's handsome face, revealing a sense of wonder and innocence. Pull back to Basquiat stroking large canvases surrounded by natural beauty.

It must have been a blast for the two artists to collaborate together. That's the story the pictures hanging on the wall tell.

Jaffe and Basquiat were introduced in Los Angeles in 1983. Shortly after, the two set out on a round-the-world-trip, and the On the Road series now showing at the Shooting Gallery is the result of this journey.

Unfortunately, Basquiat passed away too soon in 1988. But as Jaffe observes of Basquiat's enduring legacy: “Time has given people a chance to understand him better. People have come to realize what a major artist he is.”

Brooklyn-born Basquiat gained notoriety when he befriended Andy Warhol in 1982. The two painted together frequently, their lives becoming intertwined.

Basquiat was greatly affected by Warhol's death in 1987, the year before he himself died of a drug overdose. You can see his story on the silver screen in 1996's Basquiat .

On May 14, 2002 Basquiat's Profit I , owned by Metallica co-founder Lars Ulrich , was put up for auction at Christie's and sold for $5,509,500 (the most money ever received for one of his works). That alone may be reason enough to go see this show!