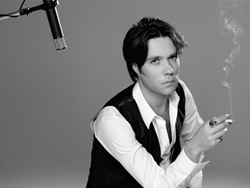 Yellow Thunder Woman is a Yankton Sioux Indian and a descendant of the Ponca tribe's Chief Standing Bear. She says that makes her a princess. She also says Ashlee Simpson should be mauled by baboons.

In her off-stage life or as half of the Bastard Fairies (multi-instrumentalist Robin Davey is the other half), Yellow Thunder Woman is not shy. With her voice double-tracked on “The Greatest Love Song” she sounds sweet, but on “Ode to the Prostitute” she sounds like a street corner Lolita with the irresistible offer, “Jimmy, I know that you want it.” And so does Billy. And Tommy.

The character that YTW imagines during “Prostitute” recurs throughout the album , not as a harlot but in the form of strong women who are going to do and say what they want, consequences be damned. Fans of the Pierces, Tegan & Sara and the Waitresses will find a lot to like here.