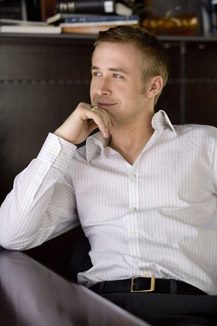 He's an accomplished jazz guitarist who has worked with Britney Spears and Christina Aguilera. He briefly dated both Sandra Bullock and Rachel McAdams, and he roomed with Justin Timberlake when both were just starting out their careers. He has gone home with MTV Movie and Teen Choice Awards and was named one of People's 50 Hottest Bachelors in 2004.

Can you guess who this Oscar-nominated actor is? Ryan Gosling.

Raised a Mormon, Gosling got his first big break in 1993 when he attended an open call audition for the “Mickey Mouse Club” and beat out 17,000 other hopefuls for one of the coveted spots. Not only did he work with Timberlake, Spears and Aguilera, but JC Chasez and Keri “Felicity” Russell as well.

He followed up his two-year stint on “MMC” with more television work until 2001. That year, The Believer was released to rave reviews at Sundance. Not only did the film win the Grand Jury Prize at the festival but Gosling was nominated for an Independent Spirit Award later that year.

Next up for the actor were critically acclaimed roles in Murder by Numbers with Bullock and The United States of Leland , as the titular character. 2004 birthed his most commercially successful movie to date, The Notebook , which garnered his MTV Movie Award for Best Kiss with co-star McAdams and landed him on People's famous list. He was also recognized as the Male Star of Tomorrow at the prestigious ShoWest Awards.

But it was 2006 that was arguably his most successful year professionally. Although the low budget indie Half Nelson only grossed $2.7 million, Gosling received near unanimous praise for his subtle portrayal of a crack addicted, inner city teacher. In addition to several critics' awards, he received his second Independent Spirit Award nomination and his first win, along with a Best Actor nomination at the Screen Actors Guild Awards.

This critical momentum culminated in an Oscar nomination for Best Actor. Although he lost to odds-on favorite Forest Whitaker, he managed to beat out several higher profile stars for the nomination, including Matt Damon, Clive Owen, Daniel Craig and Sacha Baron Cohen.

“It was great,” he replies when asked about the pressure, or lack there-of, since Whitaker was such a heavy favorite. “I got to go to all the parties and get the gift bags and didn't have to worry about giving a speech.”

A whirlwind of publicity and fame surrounds each first-time Oscar nominee. So have things changed since Half Nelson ? “The only thing that has changed is that I get asked that question a lot more now,” he says wittily.

His newest release, Fracture , co-starring Sir Anthony Hopkins, David Strathairn and Rosamund Pike ( Die Another Day ) tells the story of Ted Crawford (Hopkins), who, upon discovering that his wife Jennifer (Embeth Davidtz) is having an affair, plans her murder – the perfect murder. Crawford is immediately arrested and arraigned after confessing, a seemingly slam-dunk case for hot shot assistant district attorney Willy Beachum (Gosling), who has one foot out the door of the District Attorney's office on his way to a lucrative job in corporate law.

Of course, this “slam dunk” case turns into a high-stakes cat-and-mouse game between Gosling and Hopkins' characters. Fracture is similar in tone to Primal Fear , which makes sense considering Gregory Hoblit directed both.

Gosling had originally turned down the role of Beachum, but when he was sent the script after some rewrites, he was more impressed. “I liked the suspense, that I couldn't figure it out when I first read it and that Anthony Hopkins was playing Crawford. It's not everyday you get to work with one of your heroes.”

Having the opportunity to play judicial chess on screen with Hopkins had to be appealing as well.

“Crawford is the chess master,” explains Hoblit, “who's thought out every possible move, and Willy is one of those speed players.”

Beachum's initial carelessness leads to a tragedy that allows him to grow a soul.

“Willy can't lose this case because it will jeopardize both his jobs,” states Gosling. “Losing is not really an option. And on a fundamental level, he doesn't want to see a murderer set free, especially someone who enjoys outsmarting the law and him, as much as Crawford seems to be.”

Once Beachum realizes he's the puppet to Crawford's puppet master, the game is on.