Adam Brody: Finds Himself In the Land of Women 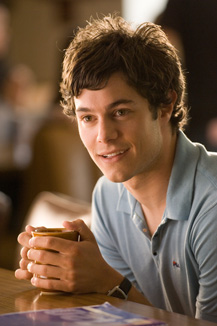 He's a regular fixture at hipster hangs like the Silverlake Lounge and Spaceland. One might not immediately equate television's quintessential boy-next-door with the underground cool that comes with dive bars and indie rock, but then again, maybe you just don't know Adam.

Brody rose to fame on Fox's (now defunct) hit series, “The OC.” As Seth – the funny guy – this California native instantly charmed his way into the secretly dirty thoughts of suburban girls everywhere. Fans were hooked.

His character on the show was the guy that always kept things fresh within the circle of friends. Think: Chandler Bing, the Next Generation.

“In the beginning, I liked the fact that Seth was a lot like me,” says Brody. But of course, after five seasons in primetime, monotony must have set in, because the young star soon began flirting with the big screen.

Midway through the series, Brody did what contemporaries like Topher Grace and Ashton Kutcher attempted with great success and made the leap into feature films. 2005 was a particularly good year for the actor.

His appearances in the blockbuster hit Mr. and Mrs. Smith (otherwise known as the film that spawned Brangelina) and the critically praised Thank You For Smoking are inspired and memorable. In both films, Brody played variations on the wise cracking, wet-behind-the-ears bloke that he does so well. (In Smith , he cleverly donned a Fight Club T-shirt during a scene in which he's roughed up by costar Brad Pitt).

“It's hard work to play the lead,” relays Brody of those earlier film choices. “Cameos are cool because other people have to carry the film.”

Of course, every good actor deserves his day in the sun. Enter: Warner Bros. Pictures new release In the Land of Women . The film, which costars Meg Ryan, delivers all the classic Brody that you know so well, but with a twist.

This declaration leads him off to “the land of women,” which is the tony Detroit suburb in which his grandmother (Olympia Dukakis) lives. There, he encounters Ryan's character, Sarah, as well as her daughters, Lucy and Paige (played by Kristen Stewart and Mackenzie Vega, respectively).

“Carter's in most of the scenes,” Brody enthusiastically confesses about the initial spark that compelled him to take this role, “and I really hadn't had that before.”

He adds, “I was also really impressed by Jon.”

Jon Kasdan, son of Lawrence Kasdan , the director of The Big Chill and Executive Producer of ITLOW , shares equal sentiments about Brody. “Adam is the heart, soul and life blood of this film.”

The neophyte director was so impressed with the young star, that he halted production for eight months until his buddy was available to begin shooting. The result is an all-new Adam Brody – one that is a bit more grown-up and self-aware.

So much that it's allowed to him to graduate from teen idol to creative muse for the younger Kasdan: “Carter is a character not unlike me in a lot of ways. He's a very, very verbal young guy who has lived his life sort of in a neurotic kind of active and imaginative way. All of his successes and failures have been related to his ability to express himself.”

It's not every day that a first-time director finds that kind of symbiosis in a lead performer.

When asked what life lessons he took away from his experience on this film that deals largely with love, loss and redemption, Brody admits, “I don't know that any life lessons were taught to me.” But as a viewer, the change is unmistakable. This is a guy who has gotten serious about his career.

Brody's upcoming projects ooze the cutting-edge brilliance reserved mostly for festival-circuit mainstays like Gael Garc í a Bernal and Ryan Gosling. In 2007, Brody will star opposite the comedically gifted Anna Faris for the release of Smiley Face .

The film, directed by the sultan of bad ass, Gregg Araki, will feature Brody as Steve the Dealer. (If you've never seen an Araki film, trust me: This should be interesting.)

The 27-year-old actor will also appear in the heavily awaited ensemble film, The Ten , costarring Winona Ryder and Jessica Alba. Here, Brody will almost surely shine in one of ten stories, each based on the various Ten Commandments.

I got the chance to ask what actor he would give life and limb to have as a costar. “I'd really like to work with Tim Robbins,” he says. “I think he's great and underused.”

Shaun of the Dead's director, Edgar Wright, is also on this talented actor's radar. “I really like him. I like the tone of that film.”

This, to some, is an interesting choice to top a career wish list, but to Brody, it's a true reflection of who he is.

Regarding future film roles, he says, “I would love to be an asshole. I definitely have that side to me. I think I come off much nicer than I am.”

An unguarded admission like this may come as a shock to fans who are sure to flock to theaters, fixated on Brody as the handsome leading man in ITLOW . But it's like I said before: maybe you just don't know Adam.

In the Land of Women releases in theaters April 20.