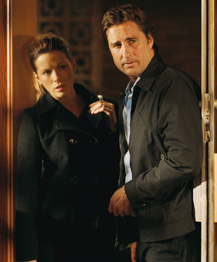 Go ahead; try to even passively harbor distaste for him. His subdued sense of humor makes you ache in your sides as well as your heart.

Wilson maintains an air of normalcy while establishing himself as genuinely funny, appealing to the mass public through his realistically vulnerable and sometimes endearingly confused manner. He distinguishes himself amongst the exaggerated physical comedy of “frat pack” brothers Vince Vaughn, Will Ferrell, Ben Stiller and actual brother Owen Wilson, as they are more commonly associated with hysterical laughter, catchy, quotable jokes or memorable gesticulations.

Born in Dallas, Texas, if you ask Luke Wilson what he'd be doing if he weren't acting, he replies: landscaping. Moving to L.A. to jump-start a film career with a cult following was not exactly what he had planned.

Majoring in English with a minor in art history at Occidental College, Wilson has always been fascinated by photography, film and journalism. He admits he may never have made the leap to film if it weren't for his brother Owen, Wes Anderson and a little movie called Bottle Rocket .

What was conceived as a 13-minute amateur short, starring Luke and Owen Wilson by financial default, was discovered at Sundance and made into a monetarily ill-fated feature. Despite its “failure” from a suits point of view, Bottle Rocket developed a deeply loyal and ever growing following.

The film's faithful appreciate its eccentric tale of magnetically intriguing dysfunctional brothers who embark on a half-baked robbery scheme. The uphill battle of Bottle Rocket turned out to be a double-edged sword.

“I had found something I loved and could finally dedicate my life to, and this might be the last time I ever get to do it,” Wilson states, referring to the studio's skepticism and reluctance towards production of the feature film.

Fast forward through years of growing success as an actor and writer, in which Wilson involved himself with culturally distinguished films like Rushmore and The Royal Tenenbaums and contemporary commercial staples of comedy like Old School and Anchorman: The Legend of Ron Burgundy .

Though Wilson has seen his share of horror flicks, nerves and a basic human fear of the unknown caused him to originally turn down his newest role in the thriller Vacancy . Sony executive, Clint Culpepper himself, had to talk Wilson off the fence. Shot on the largest sound stage in the world, a reportedly haunted one at that, Vacancy was the studio's attempt to create the ultimate Hollywood horror film.

Wilson plays David Fox, husband to Amy Fox (Kate Beckinsale), whose marriage has deteriorated after the death of their only son. They take a final trip together, where a shortcut lands them at an isolated motel.

After the introduction of a creepy night manager (Frank Whaley) and mysterious noises coming from the room next door, David settles in to watch some unmarked tapes. What appear to be B-rate horror films are soon discovered to be real – and set in their very motel room.

Under the watchful eye of multiple cameras, the Foxes soon realize they are trapped and set to be the next victims in this bloody murder game. With the entire set built on one sound stage, the claustrophobia stemming from the narrative is only accentuated by the physical construction of the set. Wilson acclimated like a pro, except when they added the rats.

Like every young boy's affinity towards destruction, “smashing windows and getting stabbed” was Wilson's favorite part of the film.

Unwavering in his honesty, Wilson never hesitates to shamelessly disclose personal tendencies or fears that most others constantly work to cover up.

“I don't set goals out of fear of not achieving them,” Wilson shares when being asked of future career aspirations.

In an ideal world, however, he would create all his own films highlighting his hilarious ensemble of friends. There is a sense of warm satisfaction Wilson gets from making a film in an upbeat comedic environment with the people he holds closest, knowing his viewers will enjoy watching that same film with their closest friends.

Wilson is the heartfelt new face of talented indie cinema that offers hope to aspiring filmmakers, demonstrating that it's possible to create challenging and entertaining art, simultaneously.

Also on his radar is starting a production company with his brothers that Wilson sternly clarifies “is not a vanity thing,” but a vehicle to recruit and offer a chance for new struggling filmmakers.

“Sundance film festival has gotten off track and lost a lot of its indie quality,” Wilson states. “I hope other film festivals can recapture what has been lost at Sundance.”

Luke Wilson would never claim such fantastic goals of reinvigorating creative magnificence and pioneering a new appreciation of undiscovered film genius, out of modesty or fear of falling short; that doesn't mean it isn't true.