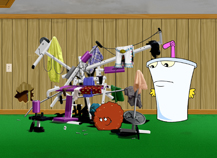 The animated film Aqua Teen Hunger Force Colon Movie Film for Theaters has nothing to do with water, adolescence or the ways of the Jedi. It does zoom in on the animated antics of Master Shake, Frylock and Meatwad, who unite to find the origin of a mysterious piece of exercise equipment that threatens to “change the world as they know it.” This film, the brainchild of Dave Wilis and Matt Maiellaro, the creators of the original Adult Swim TV series, starts messing with the audience straightaway.

Here's some advice: If you walk into the theater unprepared for the storyline cul de sacs and dead-end alleyways that are surely inside jokes, you won't get it. However, if you do the inverse of thinking on your feet (laughing while sitting on your ass) you'll be OK.

There are a few “did-they-have-to-go-there” moments, but you quickly learn to forgive and forget because something as equally funny as it is offensive pops up, and you're sucked back into the directors' fray. They pepper the viewer with a gatling-gun barrage of off-color jokes, gag-reflex humor and blood-splatters.

See “Aqua Teen Hunger Force” regulars like Carl, the next-door neighbor, the Cybernetic Ghost of Christmas Past, Dr. Weird, the spaced out home invaders Ignignokt and Err, the Plutonian foils from outer space that are the Oglethorpe and his green partner in crime, Emory. (Neil Peart of Rush has a small vocal part in the film.)

At points ATHFCMFFT borders on “Mystery Science Theater 3000” with all the inside jokes, but if you're able to let yourself go, eschew any thoughts of finding a hidden plotline and roll with it, you'll enjoy this smorgasbord of shamelessness.