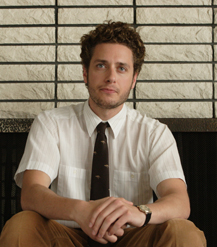 In this quirky, comical, independent flick, Paulo Costanzo ( Road Trip ) stars as Ryan, a sluggish 29-year-old who photographs lottery winners for a magazine. The woman he loves, Ming (Steph Song), is dating a con artist named Bryce (JR Bourne), who convinces him to participate in a “get rich quick” scam. Fearing her disapproval, Ryan must choose between his love for her and the temptation of the perfect scheme.

The first screenplay written by Douglas Coupland ( Generation X ), Green features a bizarre collection of characters and humorous incidents. There's a particularly funny scene when Ryan discovers his parents are growing marijuana plants in their basement.

Then there's the comical and peculiar knife-wielding Asian grandmother who spends her days waiting for home invaders to smash down the door so she can “knife them.” Add to that, the Human Resources interviewer who hires Ryan because he seems to be the only one who showed up for the interview!

Although Green is billed as a love story, there's not much onscreen chemistry between Costanzo and Song. It has the potential to be a smart, hip and totally hilarious flick, but much of its hilarity comes from only a few scattered scenes. When it's funny, it's uproarious, and when it's not, well ... Still, it's worth watching for its quirkiness.