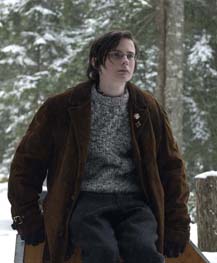 It seems overly simple to say that a film set in Nova Scotia brings an outsider's perspective to the multiplex. Yet time and again, writer/director Amnon Buchbinder's slow musing on the notion of the modern family seems effortlessly fresh and vibrant.

Buchbinder's film is all about the periphery. Emerson (Aaron Webber) is home-schooled by his back-to-nature, green-living, tai-chi parents Kaya (Rebecca Jenkins) and Rog (Robert Joy) in a house they built themselves in the middle of the woods.

Concerned about their son's angsty, burgeoning pubescence, Kaya and Rog send their precocious 13-year-old away to middle school where he immediately befriends his English teacher, Don (Daniel MacIvor). As the class reads Shakespeare's “As You Like It,” and Emerson becomes increasingly attached to his erudite teacher, Buchbinder crafts a delicate story of unrequited love.

While Emerson desperately searches for connection in a cold and distant world, Don rightly understands that some kinds of love, no matter how passionate or enduring, cannot ever be realized. It is in its frankness, in its unwillingness to compromise or mitigate its characterizations of loneliness, sexual attraction and ultimate friendship that the film is most effective and engaging.

Buchbinder's greatest strength here is his remarkable cast. All involved deliver outstanding performances that lift the film out of its occasional lapses of sentimentality and anguished clichés. MacIvor in particular strikes a marvelous chord of distance, self-loathing and deep-seated humanity as an English teacher whose life hasn't turned out exactly the way he planned.

There are many ways to feel alone in this world and far too many cracks into which the abandoned may fall. But Buchbinder knows that for each and every one of us, there is always one friendly hand, outstretched and eager to pull us close for an embrace.