So Bad it's Good Film Fest: The Rise of Bad Cinema 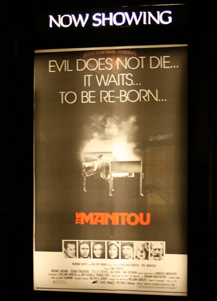 The So Bad It's Good Film Festival (SBIG Film Fest) hosts a monthly midnight screening at the Vista Theatre in honor of bad cinema. A bad movie connoisseur myself, I'm amazed, mesmerized … outraged! Why haven't I heard of this before?

In all fairness to the SBIG Film Fest, I discovered its first screening was only in January. But, after learning it had already screened Gymkata , as well as the granddaddy of all bad movies, Plan 9 from Outer Space , I was determined to track them down.

Friday, March 30, midnight. The Fest was screening The Manitou , a movie I had longed to see ever since I read about it in an old book I owned, Terror on Tape . Stella Stevens, my childhood crush from The Poseidon Adventure, was in the movie and was scheduled to appear.

This was my chance. I had to be there.

I quickly rattled off some of my favorite bad movies. Movies that I would kill to see on the big screen: Troll 2 , Shark Attack 3 , Leprechaun 4 .

Although they enjoyed my suggestions and said they'd be happy to review them, they made it clear that they weren't going to show just anything. Smith and Blagrove take their bad movies seriously.

They say they have a standard, a system for choosing films for their monthly screening. They even have an SBIG Board that carefully reviews each film.

“These films cannot just be bad,” declares Smith. “So Bad It's Good Cinema is an art form in and of itself.”

And that's when David proceeded to lay down the rules for me:

One: The filmmakers have to try to make an entertaining film.

Two: You have to want to watch it again.

Three: You have to want to invite a friend or two over to see it afterward.

Four: The quotes that you find hilarious do not make any sense to anyone else, and you will scarcely be able to utter them without cracking yourself up.

Five: There is rarely a bonafide funny thing in such a film; all the humor is derived obliquely and quite inadvertently.

Although the answer was obvious, I still had to ask: “Why bad movies?”

Blagrove quickly chimed in, “Why not? There are revival theaters that show good movies all the time, but what about the good-bad movies? … It's a guilty pleasure. And there are a lot of people with a fondness for good-bad movies in this town. Now there's a place where these aficionados can come together once a month to enjoy some wonderfully bad cinema.”

This month, they're showing Lady Terminator – a Terminator knock-off from Indonesia that looks completely, utterly absurd. And, of course, that's a very good thing.

The So Bad It's Good Film Festival is currently screening monthly at the Vista Theatre located at 4473 Sunset Drive in Los Feliz for $10. Lady Terminator will screen at midnight on April 27. For more information, visit www.myspace.com/sbigfilmfest .