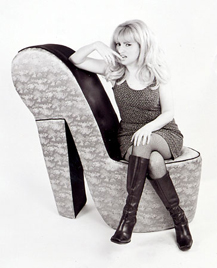 Tyson is no stranger to energetic crowds. Born in Detroit, she spent time in Chicago, and has lived in the City of Angels for longer than she can recall.

She didn't know she'd grow up to be a rock queen; it happened quite by accident.

Tyson's mother was a singer, but Tyson was into acting. One night, Tyson was in a hotel with her aunt. They heard music coming from the lounge. After following their ears, a man approached Tyson and asked if she sang.

Turns out, the dude was a vocal coach and ended up piquing Tyson's interest in pursuing singing as well as acting. She began training with him and the rest is his- Torie .

“I started going to talent shows,” says Tyson. “Anywhere I could get up and sing. From a jam night, I put my own band together. I started writing lyrics with different guitarists, started recording, and it took off from there.”

Tyson still does the acting thing. She can be seen each Sunday night performing improvisational comedy at L.A. Connection in Sherman Oaks, which is in fact where I met her.

She also appears in the upcoming indie films The House of Adam and Behaving Badly . But nothing can keep her from her music. She regularly plays Club Vodka and other popular clubs around town.

So what does Tyson feel the difference is between acting and music? “With music, I can write my own script, do my own thing, be as outrageous as I can be.”

When asked about her influences, Tyson cites just a few examples, as she has too many to claim. Among those listed are: Blondie, Rolling Stones, Bowie, the Doors, Joan Jett, Lita Ford and Elvis.

She describes her sound as “rock 'n' roll with a punk edge,” but she'll leave it to her fans to evaluate her sound.

“All I want is for listeners to get into it, have a great time, feel the energy,” she says.

Tyson has released two CDs, You're Gonna Get It in the End and a recent self-titled piece. She has written with former Life, Sex and Death guitarist Alex Kane. The two have collaborated on tunes such as “Saturday Night,” “Everybody's Asleep” and “You Push Me Down.”

To any readers who are aspiring musicians, Torie advises, “Just be yourself. Do what you do best. Don't try to be something you're not.”

Such advice is helpful, not only in the music biz, but in everyday life. In an age when watered down “American Idol” programs rule the world, all we can do is be ourselves and hope America starts rocking again.

“Music needs to get back to good entertainment,” Tyson proclaims. “Get back to shows that, when you went, you felt something, not just to see someone lip-syncing.”

We all know “American Idol” is calamitous to the music industry. But with legends-in-the-making like Torie Tyson, at least there's a glimmer of hope for a brighter future.