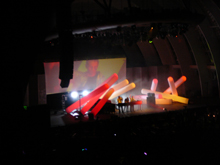 Muse is love, plain and simple. No two ways about it, Matt Bellamy, Dominic Howard and Chris Wolstenholme are full of awesome, and now they've finally gotten a stage show that reflects it.

Not that the years of shows prior were boring, poorly performed or anything of the sort, but finally Muse is playing venues here that are big enough to hold that massive sound they create. And even then, the Forum struggled with that a bit.

Opening with “Knights of Cydonia” the British rockers played songs spanning their musical career, giving equal attention to older material for longtime fans and newer songs for fans who jumped on board with their meteoric rise to mainstream popularity with 2003's Absolution. Covering “Feeling Good,” the band went back a little further into musical history, but nevertheless, its fans responded with equal excitement for the song, which highlighted front man Bellamy's unparalleled vocal range.

Going full out with the special effects that may otherwise seem cheesy for a band that has so much riding on its artistic integrity, the band members' approach to giving their audience a full show served only to highlight their instrumental skill. Each member showed his distinctive personality in his playing while seemingly, effortlessly proving to be one of the tightest, most in synch musical units in rock today.

Thrashing on his guitar through fan favorites “Time is Running Out” and “Hysteria” while maintaining perfect vocal pitch and control over his soaring vocals, Bellamy's stage presence was definitively epic throughout the band's set. Balanced by bassist Wolstenholme's more subdued and less flashy demeanor, each of the three band members showed an understanding of how to play off each other as well as how to engage and play off of their audience as well.

Capping their set with “Starlight” and “Plug in Baby,” effectively book-ending their set, the always progressive rockers planted their flag as the ultimate cool-kids-only band that isn't bogged down by elitism and remains undeterred by mainstream success.
Article posted on 4/16/2007
This article has been viewed 1150 times.