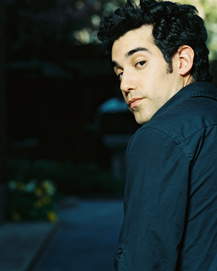 While catching up on the latest drama between McDreamy and McStreamy, Joshua Radin was right there with you. As the antics of the J.D. made you giggle on “Scrubs,” Radin was there again. His name may not be immediately familiar, but more than likely you've heard Radin's hushed, melodic sound in the background of one of your favorite shows.

Songs from his independent release First Between 3rd & 4th and his first full-length album, We Were Here, have been featured in shows such as “Grey's Anatomy,” “Brothers & Sisters,” “What About Brian” and “One Tree Hill.” Music tastemaker for the indie rock sect, Zach Braff, was a college buddy of Radin's and started the ball rolling for his soundtrack popularity by suggesting his music for a TV episode.

“The thing that started it all was Zach taking my songs to the producers of ‘Scrubs.' The producers liked it a lot [and] used about five songs. All of a sudden my songs started popping up on these [other] shows,” says Radin. “It's awesome. I feel so lucky.”

Radin has recently been on the road touring with fellow singer-songwriter, Schuyler Fisk. The two share a mellow, heartfelt sound that makes their collaboration seem a natural fit. They met while working the L.A. music scene playing smaller venues and found that their mainly acoustic styles blended well together.

“We met through friends in L.A. and playing the Hotel Café. We decided to write a song together, and [the tour] just kind of came out of that. Not only that, she sings back-up harmony with me after she's done playing her set,” he shares.

Radin's earnest lyrics tackle the highs and lows of love on his latest release. While the theme of love has been a well-covered song topic, his storytelling has earned him praise from critics and complementary comparisons to artists such as Simon and Garfunkel and Nick Drake.

The songs on We Were Here teeter between the trials of a past relationship and the start of a new one. On standout track “Sundrenched World,” the tone of Radin's airy voice and a single cello create the feeling of heartache expressed in the lyrics about the slow deterioration of a relationship.

But the pain is balanced with songs such as “Someone Else's Life” where he expresses the joy of newfound love. Between Radin's subtle voice, powerful lyrics and creative imagery, the album as a whole tackles that well-worn love topic pretty well. On its release, We Were Here received four stars from Rolling Stone .

“I try not to get too excited about reviews, especially the good ones, because then you have to take the bad ones equally. You don't want to be a hypocrite and only take the good reviews. So, I just do my thing,” explains Radin. “But Rolling Stone was really cool. It made my mom really psyched.”

Radin's pure sound and TV exposure caused a bit of a label bidding war as to who would get the rights to the album. In the end, Columbia Records won due to their tie to one of Radin's idols, Bob Dylan. According to Radin, talks are still ongoing for him to be tour opener for Dylan.

Within the past six months, the Radin buzz has steadily grown. On his tour with Fisk, he has had the opportunity to play new and bigger venues.

“The Bowery Ballroom in New York was amazing. It was really cool to be able to sell out the Bowery. The El Rey in L.A. just sold out, so that's going be a fun show,” assures Radin.

Like any young, emerging artist Radin looks forward to the nights of playing packed houses.

“It's like everyone's hanging on every word … and that's the rush,” he says. “ I feel like the luckiest guy out there.”

Although Radin describes the vibe at his show as “dead silent,” apparently in this case, silence speaks pretty loudly.

We Were Here is currently available. Joshua Radin will perform April 21at the El Rey in Los Angeles. For more information, visit www.joshuaradin.com .