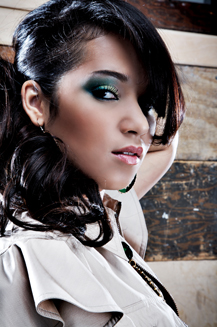 “I love when people tell me how one of my songs makes them feel,” says the 23-year-old Harlem-based rapper/singer Lumidee. “Knowing the music is reaching the people and affecting them … It's motivating to me.”

Lumidee's sophomore CD, Unexpected , hit stores yesterday. Sitting in a suite in Beverly Hills' Le Meridien, the Puerto Rican starlet is tired. She hasn't stopped moving since she was 19 when she burst onto the charts with her international hit “Never Leave You (Uh Oooh)” from her debut, Almost Famous (2003).

“My life changed so much after that song,” she shares. “I had to grow up fast. There was no going back. Now I'm living my dream. I'm doing what I love for a career. I actually have a career.”

“I went through a lot of bumps and bruises,” she continues, “but I learned a lot. If I had to do it over, I would do it the same.”

Lumidee got her first big break when a DJ she was recording with played “Never Leave You” in a club. People started frequenting the spot just to hear her record. Soon, other DJs started requesting the jam.

“At the time I didn't know how important a hit was,” Lumidee admits.

Now, of course she knows how one radio smash can alter the course of an artist's destiny. Her current single from Unexpected, “She's Like the Wind” featuring Tony Sunshine is gaining buzz.

“The people picked my single,” explains Lumidee. “It was supposed to be a European release. I've had my European deal for over three years now. Then we decided to leak it over here, and it started getting a response, so it wound up being the single.”

Unexpected is bustling with other cameos, including NORE, Pitbull, Jim Jones, Shaggy and the face of West Coast hip-hop himself, Snoop Dogg, on “In It for the Money.”

“In a meeting somebody mentioned Snoop Dogg for another record I had,” Lumidee begins, “and I was like, are you telling me I could possibly get Snoop Dogg on my album? I said ‘if you're going to try to get him then I have the perfect song for him to get on.' We sent him the record, and he jumped on it.”

In addition to having to grow up fast in the past four years, Lumidee has also had the opportunity to travel the world.

“I'm already on my second passport,” she says. “I've been to Africa, the Middle East, Lebanon, Greece, all over Europe, Iceland. I had never even heard of Iceland before. They have three hours of night. The rest is daylight. It's daylight and it's 2 a.m. You finish your show, and it's daylight!”

Lumidee gets animated when describing the reaction she gets from international fans.

“I had another joint for Iceland and Greece called ‘Sientelo.' Africans were singing it. Songs you don't even know reach out there. People can't speak to you, but they can sing the lyrics to your song. Music really is the universal language.”

Lumidee is truly blessed. Her father died when she was 11, and her mom spent most of Lumidee's childhood in prison. At the age of 14 she was diagnosed with rheumatoid arthritis and told she wouldn't be able to walk in a year's time. In 2002, one year before the release of her debut, she underwent hip replacement surgery.

Fearless and foxy, Lumidee has taken every obstacle she's faced and used it to spur on her success, which could be labeled Unexpected.

“My fans will be satisfied with this album,” she assures. “I'm giving them a little taste of reggae, hip-hop, reggaeton, pop, R&B – a mixture of everything.”

When asked about her interest in other artistic endeavors like acting or launching a clothing label like other celebrities, Lumidee answers simply.

“My main focus is music,” she says. “This is not a gimmick. This is what I love to do. No matter what … I want people to hear the music and respect it. I may not be the best singer in the world. But I'm me. And there are plenty of people who can't do what I do. I'm the best me I can be.”