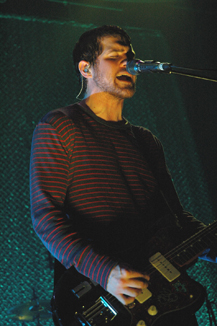 When a band has more than one album it's so easy to say that you love the old material and that all the new stuff it plays proves it sucks and somehow you're cooler than all your friends for jumping off the bandwagon when you did. It's almost something you have to say to earn your elitist cred stripes in the scene.

Not giving its fans room to engage in any such douchebaggery, Brand New has done the near-impossible and come into mainstream recognition with even more artistic integrity than when it started, while showing it hasn't forgotten longtime fans either.

Opening with “Seventy Times 7” from its first album, Your Favorite Weapon, the band continued strictly with favorites from Weapon and its follow-up, 2003's Deja Entendu , including “Play Crack the Sky” and “The Quiet Things That No One Ever Knows.” As much loved as its older songs may be, the group surely left many fans wondering if and when it would play any newer material.

After a short break from the stage, the Long Island natives returned to open the second part of their set with the instrumental “Welcome to Bangkok” from The Devil and God are Raging Inside Me and let it be known that their latest music is anything but kid stuff.

While most bands only get full-venue responses to old fan favorites, every song the band played off The Devil and God garnered a response equal to that of its staple songs. Following with the album's lead single, “Sowing Season,” and its more popular tracks, the band members proceeded to show why their newest material is what puts them on par with the great icons of modern rock.

Arguably saving the best for last, the set reached its apex as the group began the slow building notes of “Degausser,” switching into a frenzied freight train pace and intensity that spoke of skilled musical artistry. While all the album's tracks show the distinct leap in instrumentation and emotional insight for all the band members, “Degausser” specifically shows frontman Jesse Lacey at his most vulnerable and honest, to the point that it's viscerally evocative and damn near painful to hear, even within the more subdued side of his tonal range. As guitarist Vinnie Acardi wildly thrashed around, halfway between spastic epilepsy and controlled rhythm to contrast the more visually introverted Lacey, the two played off each other flawlessly, mirroring the stylistic poles that so similarly define their latest album.

Finishing with “You Won't Know,” Lacey wailed the titular words and closing line a capella with his signature haunting angst-ridden yell, but with a newfound maturity the old Brand New hadn't quite grown into yet. It was only a matter of time before it happened, but rock as we know it can officially consider its bar raised.
Article posted on 4/16/2007
This article has been viewed 1119 times.