Punk Rock Eats Its Own: A Film About Face to Face: April 18 @ Arclight Cinemas 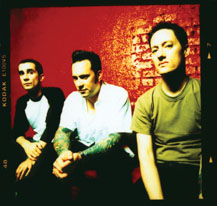 It's been a long three years since the members of Face to Face decided to call it quits for good – the group officially said so long with “The Only Goodbye” farewell tour in 2004 – but the impact it left behind is still being felt today.

It was the early '90s when Face to Face emerged on the scene amongst the snotty and the goofy, the political streetpunks and the melancholy, flannel-wearing rockers, with a new breed of punk that fused melody and emotion with meaningful songs about life and loss.

Now in its sixth year, AFI's music documentary series – running through May 9 – will show the feature-length documentary, Punk Rock Eats Its Own: A Film About Face to Face. The film chronicles the rise and fall of the band with interviews from Face to Face members Trever Keith, Matt Riddle, Rob Kurth, Chad Yaro, Scott Shiflett and Pete Parada, manager Rich Egan, rare video footage and exclusive live performances that spawn its 13-year career.

In the band's heyday, it was pit up against heavy hitters Green Day, the Offspring and Blink-182, all of which found success in larger numbers. Face to Face, despite the successful radio hit “Disconnected” in 1994, never really garnered much mainstream love.

Face to Face may remain relatively unknown to many, but in the grand scheme of things, the band touched the lives of legions of die-hard fans and its musical influence echoes from the sounds of the new-school bands of today. The impact it continues to make is firmly staked in the punk community.

A post-screening Q&A with Face to Face frontman Trever Keith, producers Mathew Barry and Maureen Egan and Vagrant Regords/Hard 8 Management owner, Rich Egan, will follow, along with a hosted reception.

The ArcLight is located at 6360 W. Sunset Boulevard in Hollywood. Admission is $11, $10 for AFI, ArcLight and Skirball members. The screening ticket acts as admission to the reception. For more information, visit www.arclightcinemas.com.