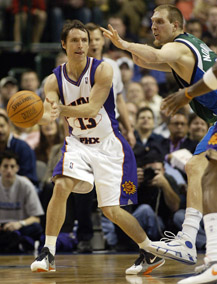 The post-season in the National Basketball Association is going to be one of the most interesting and fun in years. As seen in the past five years, the Western Conference is the most difficult to unfold in regards to a definite division winner. In the Eastern Conference, there are a few new teams surfacing to battle it out for the NBA title.

In the East, a handful of new teams are trying to take out the old dominant teams. One such team in contention is the Atlantic Division-winning, Toronto Raptors.

The Raptors (45-33) took a division this year that is usually fought for by the Philadelphia 76ers, Boston Celtics or the New Jersey Nets. With all the changes happening around the league due to trades and free agent signings, the Raptors, led by forward Chris Bosh, have finished this year with respect as a young hungry team.

I predict this team will at least go into the second round after beating the Washington Wizards due to a season-ending leg injury to the Wizard's All-Star guard, Gilbert Arenas. In this second round, the Raptors will face a tough challenge with the defense-minded Detroit Pistons.

Another Eastern team who is continuing to dominate the Central Division is the Detroit Pistons (50-27) . Coach Flip Saunders has kept his team focused on defense and fundamental play.

This Pistons team is looking to avenge its loss in the Eastern Conference championship last year to the Miami Heat. One thing that Coach Saunders has to be concerned with is the players' abilities to control their on-court anger as well as they perform their court execution.

The one person that could give this Pistons team that much needed push in that direction is newly acquired, hometown favorite Chris Webber. The former Sacramento King and Philadelphia 76er has given the Michigan faithful a new reason to believe that the Pistons can play, “Deeeetroit baaasketball,” (as the Pistons PA announcer says) and win another title.

Of course, the post-season would not be the same without mentioning the always-entertaining center Shaquille O'Neal and his Miami Heat. The ballers of the Heat (42-35), probable winners of the Southeast Division, are holding onto their position by the hem of their shorts right now.

With its leader and co-captain, guard Dwyane Wade, having a partially injured shoulder from playing, the Heat limps into its playoff spot. As long as O'Neal continues to lead this Miami team by dominating other big men on the inside, the Heat will make another run at making it at least to the Eastern Conference finals. I say the Heat will lose in six games to Detroit in the conference finals.

As far as the Western Conference goes, it's rather easy to say who the division winners are, but one of them is under the radar. The Dallas Mavericks (64-13), Phoenix Suns (58-19) and Utah Jazz (48-29) are clear division winners. The few teams in the West that could definitely surprise and come up are the San Antonio Spurs (56-21), Houston Rockets (49-29) and Denver Nuggets (41-36) with Allen Iverson joining Carmello Anthony to lead them into a serious playoff run.

For now, we shall talk about the mighty Mavs, Suns and Jazz going into the stretch run of the season's end.

The Mavs have the best record in basketball and nothing will change that, because they clinched last week. Head coach Avery Johnson has instilled a toughness and defensive-minded approach in this team. Not only do the players not give up a lot of points anymore — giving up only 92 points per game —but they still score in bunches with an average of about 100 points a night.

The co-captain and MVP candidate, Dirk Nowitzki, has his eyes set on bringing the Lone Star State a title this year. The Mavs are still in hot pursuit of the championship banner due to the disappointing loss last year to the eventual defending champions, Miami Heat. They lost the series 4-3 after being up two games in last year's conference finals.

So this year, I'm sure Nowitzki and the rest of the Mavs will kindly give up his possible MVP trophy for an NBA championship ring. This could be their year, but they have to go through the Suns and maybe even the Spurs to reach that goal. With the best record and home court advantage throughout the playoffs, that ring is for them to lose.

The Phoenix Suns also feel like they have a strong case to pursue tasting the championship champagne. This team, run with the help of another MVP candidate, point guard Steve Nash, could emerge as NBA titleholders this year.

Nash has put this Phoenix team on his back, and with a full, healthy team will be hard to beat in the West. Last year, the L.A. Lakers pushed the Mavs upon the brink of elimination before eventually losing to them in seven games.

But last year, the Suns were missing one major component, center Amare Stoudemire, who's been taking the league by storm. If he can keep his composure and refrain from provoking technical foul calls from the officials, he will help Phoenix climb that mountain.

Stoudemire was hurt last season and the team used the bench and fast style of play to almost make it to the finals. If anyone looks at the team's chemistry, coaching and style of play, many would agree that the sun will not set until Nash leads his crew to an NBA title.

My pick: Phoenix over Detroit in six, because home court advantage can change in just one game in this league.