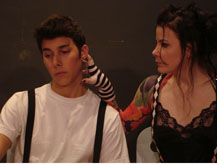 The future. An unspecified time and place. The sounds of a battle rage outside.

We're introduced to the lovely Antar (Niamh McCormally) and her Cyborg husband, the fresh-faced Galoise (Jack Littman), as they sit blankly in a sparsely furnished living room.

Galoise, as we learn, has been purchased by Antar to be her own customized life-companion. A robot programmed to love her, Galoise interprets Antar as the perfect “need-machine” of which only he is equipped to satisfy.

The conflict begins as Antar expresses her dissatisfaction with Galoise and a desire to cancel her contract. Naturally, this does not sit nicely with either Galoise or the company from which he came, represented by his technician, “mother-in-law” (Gray Palmer).

The drama takes a turn with the appearance of the gritty, bearded Charly (Andy Hopper), an insurgent fighting in the rebellion outside. His ultimate aim is unclear, but in the immediate, he's got his lusty eyes on Antar.

Thus we have the premise for a brilliant new work from veteran playwright Rita Valencia. Produced by the famed avante garde theater company Padua Playwrights, “A New World War” manages the all-too-extraordinary feat of being both blissful entertainment and unnerving social commentary.

Valencia's script takes us seamlessly into this bizarre world with an almost malicious sense of humor. As we enjoy a dazzling array of literary gems, we are simultaneously belly-punched by the poignancy of her insight into the psychology of modern society. Valencia poses serious and unsettling questions about human nature, our relentless cravings and the notion that fulfillment may be achieved at last if only we can get our hands on the right “package.”

The script is served well by a remarkable cast of performers. McCormally, as our would-be heroine, Antar, is absolutely captivating by virtue of her natural beauty and impeccable timing. She plays the part with the same spine chilling ferocity with which she has astonished theater audiences for years.

Littman, as her robotic husband, is perfectly cast, both by sight and talent. His unblemished countenance and the mechanical precision with which he delivers his lines complement his role as a state-of-the-art plaything.

Hopper, as the grimy, cum-struck revolutionary, Charly is a sheer joy to behold. The room veritably stinks with the raw masculinity of a young Brando as he graces the stage.

Palmer is masterful in his role of “mother-in-law,” exuding the sterile cruelty of a fascist with the sudden, hair-raising explosions of a raving psychopath. In a walk-on role, Devon Carson, a true find, if ever there was one, is pure titillation in the role of “Gail.”

The conscientious eye of director Guy Zimmerman rounds out the remarkable script, a stellar cast and the fine set design and lighting.

“A New World War” takes us to a place utterly unexpected and yet, somehow, eerily familiar. It's a vision of a possible future so unapologetically pessimistic you can't help but laugh.