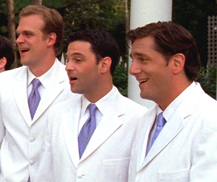 For those of you that succumbed to the charm of 2002's My Big Fat Greek Wedding , get ready, because there's a new sleeper hit on the horizon. Sing Now or Forever Hold Your Peace (written, produced and directed by Bruce Leddy) is a gem of a film that centers around a close-knit pack of buddies who once sang a cappella in college.

The movie opens, rather uniquely, with a flashback to their most triumphant performance in 1991. Sporting Boys-II-Men-style garb, they belt out Phil Collins' mid-'80s jam, “Take Me Home.”

Suddenly, we're back to present day.

Mark Feuerstein, who played the hopelessly devoted Simon Stein in 2005's In Her Shoes is Greg. He is a member of the singing group who calls on his former band mates to perform at his upcoming nuptials. So, off to Long Island they go for the wedding.

The young men who once stood so proudly on that stage were bright and vibrant and in their element. Singing was the one thing that gave them a collective sense of purpose.

However, it soon becomes apparent that the 15 years since graduation have been a long and comical road for most. Although time and careers have separated some of them, the chance to reunite and seek respite from their individual miseries proves entirely too tempting. Through an amusing and touching series of events, these old chums make amends to themselves, each other, as well as the women in their lives who are also along for the ride.

Sing Now is a bastion of solid performances from one of the best ensemble film casts today. Molly Shannon ( Year of the Dog ) steals the show as the sexy and vivacious Trish, whose husband, Ted (Alexander Chaplin), is reeling from work fears and yuppie angst.

Tony Award nominee, Reg Rogers, is also hilarious as the uptight attorney and chronic New Yorker, Richard. Wonderful performances are not limited to these actors, as everyone in the cast delivers a strong onscreen persona and an even greater contribution to the story line.

Sure, this film is your typical 30-something “what-does-it-all-mean” gabfest. But luckily for moviegoers, it's also sexy, sweet, honest, sharp and filled with good laughs and sterling musical performances. It even won the Audience Award for Best Feature at the 2006 HBO U.S. Comedy Arts Festival in Aspen.

Whether you're looking for the perfect date movie, or seeking help with a personal crisis of your own, Sing Now or Forever Hold Your Peace will leave you with the same warm fuzzies that a chubby Greek chick and a bottle of Windex gave you, just years ago.