On Set With Jessica Alba: The Eyes Have it 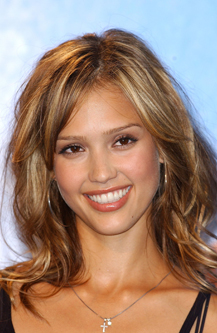 Another Saturday afternoon traffic jam in downtown Los Angeles. No car accident or construction mishap is to blame. No downed power grid is at fault.

So why are three blocks of central downtown real estate shut down and kilometers of streets being detoured and re-routed? What are all of these onlookers standing around and staring at? What is the hullabaloo for?

A film production has taken over the middle of the city. Not just any film, mind you, but The Eye , the latest Asian horror-remake to wind its way into the Hollywood studio system. The film was a Hong Kong feature that made a sizable splash, both internationally and with Asian Horror-philes stateside.

But there are a few things that seem to distinguish this production from the dump of recent arrivals to the Asian-remake scene. An especially gorgeous star and an unusually “outside” directing team threaten to make this movie unique among the crowd.

This time, the tormented female lead will be played by Jessica Alba, who looks statuesque and lean on this March afternoon. Our doe-eyed western beauty will make little use of her crystalline peepers in The Eye , for her character is blind and in need of salvation after her eye-transplant goes supernaturally awry. I think I saw an episode of “The Simpsons” like this, except it was a hair transplant for Homer.

Nonetheless, it seems like a role that Ms. Alba has sunk her teeth into. To get a grasp of her character – a non-sighted classical musician – she went so far as to walk around the house in sleep shades and practice the violin for hours a day.

She's visibly excited for this opportunity to showcase a different side of her abilities: “I wanted to do something that transcended the genre. It's a lot more interesting to me, playing someone who's blind and a classical violin player, than someone who's running in the street in a white T-shirt.”

It seems that chief among the factors keeping The Eye from slipping too ungracefully into cliché is the directorial team of David Moreau and Xavier Palud. The two directors are a pair of seemingly sophisticated Frenchmen that are, as we speak, being more and more indoctrinated into the Hollywood studio system.

These gentlemen come from a country where films are not just movies, but cinema – the land of Goddard, Truffaut and the original camera. They probably had such high hopes of elevating the art in their own way, just as those old masters before them had. Now they're steering the ship on a big-budget remake.

Still, it could be far worse for them. They're operating from fine quality source material. I haven't actually seen the original The Eye . I kind of tuned out on Asian horror movies after I saw one that featured age-defying dumplings made out of human fetus. (Too much information? At least you can understand why I've stopped watching them.)

Moreau and Palud's previous film, Ils , was a suspenseful picture that used long, eerie shots to build tension. Their approach was not flashy, or bombastic.

Instead, they emphasize an austere, drawn-out spookiness that is increasingly rare in the MTV age. Moreau compares their working relationship to playing ping-pong. It's the antidote to the stresses and difficulties of leading a production big enough to shut down several city blocks for hours.

It can be daunting, but Moreau is reassured by their working relationship: “When you're facing your own doubt, you have someone to sound off of.”

This “sounding off” apparently continued in the off-hours, when they would pass time playing music and stumbling over lyrics with their fine male lead, Alessandro Nivola.

Nivola, who'd made his mark in Face/Off as Nic Cage's little brother, is the kind of grounded and pragmatic actor that is refreshing in the modern era of Hollywood self-importance. He has a high degree of respect and confidence in the abilities of his directors and Alba: “She's very unadorned. She's very natural, and there's a feel about the movie that's very understated. I feel it's going to be important for her.”

All of the streetside gawkers may not even realize the dramatic transformation taking place within the actress they've come to catch a glimpse at. They are here to get a glimpse of the lovely star – the golden girl that's a men's magazine pin-up and bikini movie top-biller.

That's what gets folks to line up at a box-office, or along a shut down street on a Saturday afternoon. What they get with Alba in The Eye might be something they didn't expect. Let's hope they're not disappointed.