Pharoahe Monch: On the Edge of Desire 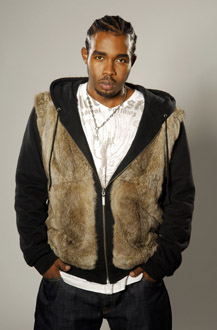 As if that weren't surprising enough, two days prior to his musical debut, he has a speaking engagement at UCLA. The Queens, N.Y.-bred MC has partnered with Guns 4 Cameras, a not-for-profit organization run by Hezues R, and the duo are spreading their message across the U.S.

“Hezues was involved in a drug, violent gang thing and he wound up getting shot three times and shot at 22 times,” Monch explains. “He turned his life around and founded this non-profit organization behind that.”

Guns 4 Cameras urges kids to turn in their weapons in exchange for video cameras.

Monch continues, trying to help me make sense of his UCLA campus stop. “I had a song that I shot a video for called ‘When The Gun Draws.' (In his song, Monch rhymes from the perspective of a bullet.) I think we've become desensitized to violence in general, and we thought we would partner up. It made sense and ever since, we've been doing speaking appearances on gun violence and the violent mentality of the youth in today's day and age.”

“When The Gun Draws,” the sequel to his former group, Organized Konfusion's “Stray Bullet,” is the first track leaked from his second solo album, Desire, to be released on June 26 through SRC/Universal.

It's been eight years since the one-time Rawkus rapper released his solo debut, Internal Affairs, featuring the monster smash, “Simon Says.” In the interim, he has guested on hits like Styles P's “The Life” and dropped the futuristic anthem, “Agent Orange,” but no full-length followed.

Commenting on the drawn-out wait for his album's release, which has been further compounded by several push backs of the actual release date, Monch answers matter-of-factly.

“It's due to label politics and previous label issues,” he relays. “On the artist side, anything that has integrity takes patience. We're trying to do it right since it has been so long. With this last movement of the release date, so many heads are just ready for it to drop, but at the end of the day, we had to put more marketing behind it. With this type of album, it's about getting people that are not aware of Pharoahe to be aware.”

His Coachella appearance aims to do just that. He guestimates that about 60 percent of his audience will be people that happen to stumble onto the stage where he's performing.

And when they do, fans are in for a treat. This is Monch's first time on the road promoting tunes from his yet-to-be-released CD. Songs like the Alchemist-produced title track and his Erykah Badu duet, which “deals with relations with dark skin women in American and within the culture,” he shares.

Then there's the trilogy of tracks which unravel like a murder mystery, all produced by Denaun Porter, a.k.a. D12's Kon Artist, who also co-executive produced the entire album.

Monch relishes his mic skills and knows that in the end, it's the reason his fans have stayed loyal throughout his hiatus.

“Not too many artists have done a song from the perspective of a bullet,” he points out. “When you are blessed and able to put out songs like that, it brands you, and the fans know they can go to you for that sort of subject matter.

“Sort of like filmmakers, like Tarantino, you know what to expect when you see one of his films. It helps that there's a standard of quality you know you'll get when you pick up a Pharoahe album.”

So what inspires Monch?

“My love for it,” he says. “Never being satisfied. Being a perfectionist, wanting to do better. I'm never really satisfied with the last rhyme or the last song. I'm constantly pushing.”

Desire will be available June 26. Pharoahe Monch will speak April 26 at UCLA and perform April 28 at Coachella. For more information, visit www.pharoahe-monch.com.