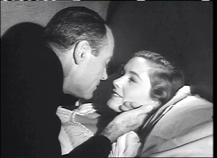 Young starlets and hopeful film producers leave everything behind to make it big in Hollywood, only to wind up in the proverbial rain-swept gutter. Maybe the secretary did it; easy on the eyes but deadly with an ice pick.

At least that's what L.A.-set film noir crime dramas from the '40s and '50s like to portray. Pick your poison out of this week's 8th Annual Festival of Film Noir at the Egyptian Theatre in Hollywood.

Included in the fest are 1948's Pitfall , starring Dick Powell and a creepy Raymond Burr, Henry Fonda's The Wrong Man and Spencer Tracy's The People Against O'Hara . Stanley Kubrick fans should check out The Killing , which he directed in 1956.

Stick around between double features because a few discussions with the actors have been planned.

“There's no question that these films are intrinsically connected to their environment,” says film historian-writer Leonard Maltin. “The ethos of Los Angeles, especially 60 years ago when so many of these films are made, was that it was still a land of possibilities, unsettled in many ways, and it attracted opportunities because of that. You see all of those ingredients in those films.”

Film noir historian and festival co-programmer Eddie Muller says that one of the differences between New York and L.A. noir is that in the former, “the characters want to escape the big city, the teeming metropolis. In L.A., you get to the Promised Land and you realize there's no escape. I find the most effective L.A. noirs are always set in places where there is a horizon, which you don't see in New York noir.”

The Egyptian Theatre is located at 6712 Hollywood Boulevard in Los Angeles. Tickets are $10, $8 for students. For more information, call (323) 466-3456, or visit www.americancinematheque.com.