Wrestling's Best: The Many Faces of Mick Foley 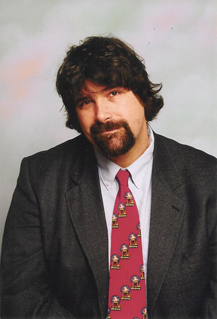 The three-time WWE Champion is literally proving there's more to a book than its cover with his latest New York Times bestselling autobiography, The Hardcore Diaries . His third autobiography to date, Diaries follows Foley both inside the squared-circle that made him famous and outside of it, from an unlikely dinner with Paul Wolfowitz to helping fulfill the last wish of a dying WWE fan. An emotional journey from beginning to end, Diaries once again proves that Foley is an entertainer, in every sense of the word.

Unlike his first two autobiographies, Have a Nice Day!: A Tale of Blood and Sweatsocks and Foley is Good: And the Real World is Faker Than Wrestling , The Hardcore Diaries is literally just that: a diary. Taking place from April 24 to June 15, 2006, Foley writes about the events of his life as they unfold, a process, he admits, that took much longer to rewrite and edit before sending the final draft to the printer. Having learned what was fit for print early on in his writing career, Foley says that despite the fact Diaries is being promoted as an uncensored look at life in the sports-entertainment industry, he had a few revisions to make.

“With my first book, there were about 300 concerns as far as slander and libel issues go,” Foley recalls, “but this time there were only one or two. As far as being asked to edit anything out, I don't really equate quality with controversy. There were really only four major concerns brought to my attention, but I fought them and won three.”

Foley admits even he was surprised with the amount of freedom he was given to discuss his career in WWE, particularly when he commented that he's spent a good portion of his life traveling around the world friendless. While WWE Chairman Vince McMahon would like for fans to believe that the superstars see each other as an extended family on the road, Foley's words truly shatter that illusion. The 41-year-old jokes that luckily McMahon likes him, though, and that he's probably one of only three people who could get away with telling the truth (odds are McMahon's son-in-law, Triple H, is one of the other two).

As if promoting The Hardcore Diaries wasn't enough, Foley's also been busy promoting the re-release of his 2004 DVD Mick Foley's Greatest Hits & Misses: A Life in Wrestling . Now a three-disc set, the re-release contains a new disc of material from 2004 to 2006.

Foley says the disc features the full extent of his comeback matches, and that he's proud of the matches showcased on the third disc (“There‘s a reason my match with Carlito at ‘Taboo Tuesday' was left off,” he jokes), even though some are “a slight step off” from his earlier matches.

“I played my match against The Rock (for the WWE Championship) for my kids the other day because I was tired of my 4-year-old saying, ‘Daddy's a stinky wrestler,'” Foley states with a laugh. “My kids were sitting there cheering for The Rock.”

While Foley's proud of the many matches featured on Hits & Misses , it's his role as WWE commissioner that he looks back on as his “glory days.” Pointing out that he got to perform in front of full arenas without having to worry about getting hurt, Foley says he remembers his time as commissioner with even more fondness than his days as his favorite in-ring alter ego, Cactus Jack.

But when asked which moment – not which character – he's most proud of in his storybook career, the longtime professional wrestler's answer had nothing to do with the sports-entertainment industry.

Looking ahead to the future, Foley says he would love to write another children's book, although “the reality of this business is you're only asked to do a follow-up if the first one does well.” While his more family friendly offerings may not have earned as much as his autobiographies, Foley still credits his children's books with being some of the best things he's done in his career.

As far as his own kids are concerned, Foley says he ranks talking to his oldest son about following in his footsteps up there with the birds and the bees as one of the most difficult talks he's had with his children.

“I discourage it,” Foley admits. “My son knows I wouldn't support him unless he goes to college first. He has to be realistic about his dreams. You always need something to fall back on.”

Currently working on his own reality TV pilot and helping edit fellow superstar Chris Jericho's upcoming autobiography A Lion's Tale , Foley may not have the time to appear on “RAW” every week, but his heart will never be far from the business that made him famous.

As far as the future of our country is concerned, Foley has his own thoughts on the current list of 2008 presidential candidates.

“I have four favorites, but I really do like Obama,” Foley concludes. “I just wish people would stop buying his book so mine could do better.”

The Hardcore Diaries and Mick Foley's Greatest Hits & Misses: A Life in Wrestling are currently available.