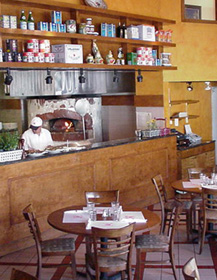 Located on the busy corner of Highland and Melrose, Alessi Ristorante and Bar is one of the most elusive of things – a neighborhood pizzeria where they ask your name and actually serve food that you’d want to eat more than once. There are many pretenders in the Los Angeles area that vary in terms of price and quality of food, which made it a nice surprise to find that Alessi Ristorante was the sum of its parts.

With the flamboyantly friendly Jack greeting you at the door and then giving you samples of the house wine (for us, it was a cabernet from Santa Barbara) along with bruschetta with a tomato and cheese topping, Alessi immediately goes the extra mile to make its patrons feel at home. The restaurant is large, split into three rooms: the lively, family-oriented pizzeria has a large bar and televisions that screen various sports programs, plus there are two private rooms for hire. One is an intimate wine cellar and the other is a larger, airy room, both of which are decorated with terra cotta and mahogany beams, giving the feel of a simple home in Tuscany.

Emphasis at Alessi is on that which is homemade. Not only are the tables made by Antonio Alessi himself – with ingenious fold-up extensions to hold the large plates – but the pasta is specially prepared and cooked to homemade perfection.

My guest and I started the meal with an Antipasta Misto made of assorted vegetables, oven-roasted in the wood-burning oven ($7.50) and Insalata Siciliana, a large salad including bell peppers, cucumbers and ricotta salate ($6.50). We then ordered a glass of the house cabernet ($7) and a Moretti beer ($3.75) to go with our meals.

For the main course, I chose the homemade Fettucini Alfredo ($9). One of the night’s specials, this entrée included plenty of chicken strips, alfredo cheese and Alessi’s own sauce, which was exceptional. From over 30 choices of pizza, my guest chose the Melanzane with mozzarella and eggplant ($10), which was subtle and delicious, the vegetables being cooked just right.

For dessert, we shared the Panna Cotta – Italian cream custard with caramel sauce, which was absolutely heavenly. The other dessert options of sorbets and ice creams (all around $6) appealed as well.

While it may be cliché to say that a local restaurant is a "hidden gem," the phrase seems to be true of Alessi Ristorante and Bar. It’s great news to find a reasonably priced eatery with friendly service and excellent food to make a regular haunt.