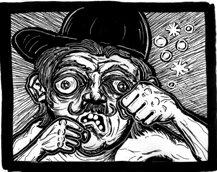 A drinking story? Well, there was the night I got poked in the eyes by a gypsy.

Yes, there was a little alcohol involved, about two liters of it, split between six of us. Being the cheap bastards that we were, it was normal for us to pre-party before going out. But, perhaps, choosing two liters of contraband Absinthe wasn't the wisest idea.

Absinthe, a.k.a. the Green Fairy, works evil magic in the minds of men. Not that we aren't typically rowdy drunks. It's just that with Absinthe, like in Spinal Tap , the dial goes to 11. Things are a little burry from that night.

One friend tripped ... over a car. The three other friends giving him a push from behind might have helped add velocity and vector to that particular stumble.

At one point, five of them de-evolved into a human pig pile in the middle of a cobblestone street. While I howled and limped around them, I bashed them with my cane (I had been rendered a gimp by a gouty attack in my ankle a week earlier, but that's another story.).

We finally arrived at the pub scuffed, bruised and dirty (and I with what was left of my cane). The place was packed. Most of the group marched inside to top off our Absinthe aperitif with a few beer chasers, while I mingled with a few friends outside.

What I did not see was four of my friends forcibly ejecting a little gypsy man out from the pub.

What I did see was a baseball cap come flying out the door and land on the ground outside.

It was Chris' cap: a dingy, old school Baltimore Orioles hat with a broken brim. The little gypsy man, who must have by then been understandably ruffled, and who may, in retrospect, have recognized the cap as belonging to one of his bouncers, picked up the hat and put it on his head.

I quickly moved to rescue my friend's hat and snatched it away from the stranger. This led the gypsy man to assume a fighting stance.

He did so by first removing the top part of his Guido Tuxedo (acid wash jeans plus acid wash jean jacket) to reveal his bare chest (the jeans plus jeans jacket minus shirt, adding appreciable nuance to the outfit). He raised both fists, palms turned in, and positioned himself in a 1920s pugilist stance.

Witnessing this absurd threat develop before my eyes I quickly, utilizing the stub of my cane, adopted my own defensive stance in what can best be described as a 1970s Kung Fu stance. (Note to self: You don't know any Kung Fu.)

A cry, from somewhere deep within the fuzzy confines of my reason, assessed the current situation and said, in a voice louder than that of the Green Fairy, “What the fuck are you doing?”

To which I responded, “Yes, what the fuck am I doing?”

With that, I shook my head at the maddened little man and walked away to join my friends.

“Watch out,” I told them, “there's this dude trying to make trouble.”

As the words left my mouth, out of the corner of my eye I saw the little man, now right beside me, doing fake karate chops. Then I saw his two outstretched fingers accelerate towards my eyes. And then I couldn't see.

I remember a number of thoughts coursed through my mind in the following moments. A few prominent ones were: “I just got blinded by a little gypsy dude,” and “Hmm, I hope I get to see again some time soon.”

The good news was that I did get to see again, but not before throwing up all over a doctor and being called a “pig.” And hey, my friends got to go beat up the little man.

If there's any moral to the story it's this: If you ever drink two liters of Absinthe with friends and get in a fight with a little gypsy man, remember to, like Curly, place your hand aligned with the bridge of your nose and block the shot.

Of course, if you're fighting Kareem Abdul-Jabbar, it's recommended that you use two hands. Long fingers.