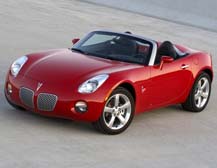 At last they had a “car guy” in charge of determining design direction. At first his record was not so impressive.

His bring-back of the Pontiac GTO was tepid (the looks of the car; not the performance). I also didn't agree with the redesign of the Cadillac two-seater.

But now that I've driven the Solstice, I applaud him. This is a car that shows how the strong influence of one man can have a beneficial effect on the product; especially evident in the front view which is pure “dream car,” unsullied by apparent bumpers.

I saw it parked next to a BMW Z4 and could only pity the Z4 buyer who likely paid twice as much and got a car that is better mechanically (and maybe resale-wise), but I wager he's not really getting twice the car. The most remarkable thing about the Solstice is the price: a mere $20,490.

I compared it most to the MX-5 (Miata) retractable hardtop, which I had recently tested. The MX-5 had a nicer interior and more trunk room, and the hardtop was wonderful. But it cost thousands more and did not have the direct return-to-center steering I liked in the Solstice.

On my trip up The Mountain (I take every test car up the same route to Lake Arrowhead.), I had to constantly correct the steering in the MX-5. In the Solstice, I could just relax and drive.

The 177 hp (plus 166 lb-ft of torque) 4L Ecotec, 4-cylinder engine of the Solstice is OK, but not a knockout. It doesn't seem to like high revs but on the plus side, it has plenty of torque in second and third.

It has to tote nearly 3,000 lbs. if you include a 180-lb. driver. There is a turbocharged option with over 30 more hp, but I think with the base engine, it's a perfectly adequate car without that being necessary. The gearbox in mine was notchy at speed, not pleasant to shift fast.

The top is mechanical; i.e. no hydraulics. You have to be outside the car to tuck it in place or raise it. A chore, but I'd rather have that than a hydraulic top that will malfunction.

The trunk is rear hinged, and while it gives lots of luggage room, it made me nervous: if the wind ever caught it, you would have a repeat of the '55 Mercedes 300SLR clamshell braking!

Getting in and out of the Solstice is not easy. It is an extremely tight fit. And you sit low in the car, peering out like from a Porsche Speedster.

This car has zero room inside the cabin for anything besides driver and passenger, so it's not one to use in daily driving if you tote a lot.

Part of the drama of the styling is the 18” tall alloy wheels (wearing 245/45R18 tires). One thing I discovered the day I returned the car is that there is no spare, only a pump and tire sealant. I miss spare tires, but I guess a lot of sports cars from here on in won't have them.

I really enjoyed the handling. I like to drift a bit, and this car will do it with ease.

Saturn sells a version called the Sky, and some people think that one has superior styling to its near kin. I disagree. The Pontiac version's nose is ever superior, even reminds me of a pre-war BMW 328 autobahn record run car.

To me, this is a car a lot of Corvette buyers should buy, instead of cars that go 170 mph, when they have no intention of ever going 170 mph. Call it “Corvette light,” if you will.

So in the end, kudos to Der Lutzmeister for keeping the hammer down and getting a car done right, without all that interference that waters a design down from non-car people!