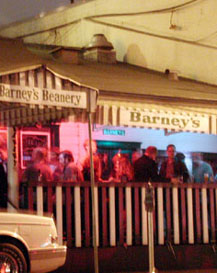 "If you like good food, good fun and a whole lotta crazy crap on the walls, come down to Uncle Moe’s Family Feedbag," said the hapless barman to Homer and the rest of the Simpsons when they came to have a look at his new restaurant.

Barney’s Beanery in West Hollywood can be described as being just like that. An old bungalow with a small stoop porch, it holds a bar that may seem like a dream for the college student, with numerous televisions so that no matter where you sit you can have a clear view of the screen. Entertainment options run the gamut, from arcade games to two pool tables, foosball and air hockey tables and a vintage Playboy pinball machine. The somewhat dingy bar offers hundreds of beers from places as diverse as Argentina, Namibia, Alaska and Louisiana.

And yes, there is lots of crazy crap on the walls. With walls that are a neon array of beer signs, tiffany lights, memorabilia, pictures, autographs and souvenirs from the worlds of film, television and music, it’s no wonder that former customers include Jimi Hendrix, Jim Morrison and Janis Joplin.

Barney’s Beanery is a haven, a mecca to all things American, and has the comfort food to match. The menu, printed like a newspaper, lists hundreds of delights, suggesting, "If we don’t have it, you don’t need it!"

The food is delicious and the prices are nice ’n’ low (unlike the caloric count of most of the menu items) with favorites including hamburgers, pizzas and notably Barney’s own chili, said to be Marilyn Monroe’s personal favorite. Breakfast is served all day, and if ever you fancy a champagne breakfast, there is a bottle of Dom Perignon – served with a giant cheese chilli dog, of course – available for a mere $175.

Serving up good times and good food for over 80 years, Barney’s Beanery is a lively place that you’ll either love or hate. A bigger version ("even more Barney’s than Barney’s") is soon to be opening in Santa Monica at 1351 3rd Street. You can almost hear Moe of "The Simpsons" cackling, "Now that’s ‘Moe’ like it!"