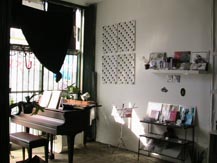 A bronze, delightfully unkempt Matt Fishbeck flags Oscar and I down outside of Downbeat Café on Alvarado and Sunset. We recognize him; leader of the Holy Shit! Band, photographer/collagist, well-known vampire of Santa Monica.

Looking Oscar up and down, Matt prods, “Are you a drummer?”

It's his business to know the new kids who haven't yet socialized beyond a quick drink at Little Joy and ventured out into the wild. He then draws a map directing us to the house where he's squatting off of Echo Park Boulevard.

“Feel free to stop by,” he suggests and scrawls the address for the nearby Tiny Creatures Gallery just a few blocks down Alvarado. “I have a show up right now,” he says.

Matt snaps a few pictures of a rail-thin Oscar against a perfect, royal blue sky. He shows me the image on his digital camera and says, “I'm that good.”

As we walk back to our apartment we realize that Tiny Creatures is just around the corner and decide to take a look. Today is too sunny for February, and the Fishbeck encounter has got us all ruffled and feeling funny.

I glance at the piece of paper. It says the gallery owner's name is Janet. I find out that Janet lives in her gallery, however, we are unable to see inside because, like the rest of these “tiny creatures,” this nocturnal being never rises before 4 p.m.

I go online to view a surprisingly comprehensive Web site listing upcoming events. Turns out Tiny Creatures (T.C.) is more than a self-described “venue/space,” but also a record label that has released material by Ariel Pink's Haunted Graffiti, Holy Shit!, and the Softboiled Eggies.

There's an upcoming screening of The Devil and Daniel Johnston and a discussion with director Jeff Feuerzeig. Like a total nerd, I RSVP for three seats, signing, “The ESL Punks.”

Clad in a comfortably androgynous one-piece, Janet greets me and offers Tecate in her kitchen/dining room/office down the hall. Candid photo booth pictures and old Part Time Punks flyers hang on the fridge. Quickly, all 10 seats in front fill up.

The show was fierce: walls speckled with Yates' neon, reflective amphetamine spurred posters; decadent images of decapitated and decaying glitter-mutant giraffes. Some brewed pots of mushroom tea were distributed among those congregated around the refrigerator while others held onto their spots in high hopes of hearing Pink's live rendition of “Trepanated Earth.”

In its short one-year history, Tiny Creatures has become a forum for neighborhood drifters to display their versatility as performers, visual artists and writers. Janet sells homemade cassettes and self-bound books of poetry or comics, hosts shows and screens films, all products of the nascent neighborhood art scene. More important, Janet has the diplomatic ability to draw an array of East Side cliques, an unusual feat in an atmosphere so oft segregated by style-lines.

On May 26, Tiny Creatures will host a reception for the opening of a new show, a collaborative display of audio and visuals by several fresh faces with a skew towards context and environment. Entitled Can't Help It , the artists' works deal with their unmitigated relationship to their epoch, the places they're from and to Los Angeles. The show will include work by C. L. Garvin, Kate Stewart, O.V., Drew Denny and Dawn Dilaudid.