Waitress: Serves Up Laughter and a Lot of Heart 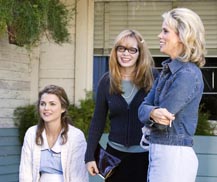 Adrienne Shelly reined as the premier indie film queen when Maggie Gyllenhaal and Chloe Sevigny were wearing scrunchies and listening to boy bands. She was one of the trailblazing art-house movie actresses throughout the '90s.

Some of her more notable performances evolved from collaborations with wildly talented director, Hal Hartley ( The Unbelievable Truth , Trust ) as well as 1993's Hold Me, Thrill Me, Kiss Me (directed by Joel Hershman). She had the face of Mary-Kate Olsen coupled with the cinematic majesty of Steve Mcqueen.

That's why Shelly's tragic death on November 1, 2006 (from an apparent homicide) was such a shock and infinite disappointment. On that day, film audiences lost one of the greats. Fortunately, she left behind a little bit of her heart for longtime fans and newcomers to enjoy.

Waitress is the third – and perhaps most joyous – directorial effort from Shelly. In the film, Keri Russell (“Felicity,” Mission: Impossible III ) heads an outstanding cast as Jenna, a small-town waitress and “pie genius.”

Instead of eating her feelings like so many other young women in her position, Jenna channels her various heartbreaks and setbacks into new pie recipes that she names (rather humorously) after said personal disasters. In a moment of self-empowerment, Jenna decides to pursue the $25,000 prize in a pie contest – that is, until she realizes she's preggers.

Earl, played by Jeremy Sisto (“Six Feet Under,” Clueless ) is the abusive father-to-be whose own childishness and selfish behavior cause Jenna to take a serious look at where her life is headed. Further complicating matters is her burgeoning romance with an attractive doctor played by Nathan Fillion ( Slither , Serenity ).

The real stars of this touching comedy, however, are the pies. The names alone like “Pregnant Miserable Self-Pitying Loser” pie and “I Can't Have No Affair Because It's Wrong and I Don't Want Earl to Kill Me” pie are hilarious.

The props department of the film worked tirelessly with Shelly, as well as a pie consultant, to create the delicious confections. But not all the cast was a fan of the culinary aspect of this film.

Nearly everyone agrees that Sisto had the worst of the bunch when his character Earl had to eat the now infamous spaghetti pie. Waitress producer Michael Roiff muses, “It was so bad, poor Jeremy Sisto could barely swallow it to complete the scene.”

Sisto's stomach still turns at the thought of the pasta disaster. With a childlike scowl on his bearded face, he complains, “It just tasted dirty.”

Shelly's untimely passing sadly didn't allow the auteur and co-star of her own film to screen Waitress with audiences at the 2007 Sundance film festival. Even more disappointing is that Shelly would never see the efforts of all her hard work and care reap the ultimate reward: a reported $5 million distribution deal with Fox Searchlight Pictures.

But Roiff stands in staunch defense of the film as a work of art. “I don't think [her death] affected the sale of it. I think the film stands on its own.”

Cheryl Hines, who plays Jenna's fellow waitress Becky, agrees emphatically. “It was a true passion project for everyone who worked on it.”

You can hear it loud and clear in the voices of everyone connected with this project. These people attached themselves to this movie in large part on the strength of Shelly's involvement with it.

“It's interesting because Adrienne and I were the same age,” acknowledges Hines. “We had daughters the same age, and we really connected.”

Sisto, who appeared in Dead Dog (2000) with Shelly, confesses that his reasons were a bit more personal. “I guess you could say I used to have a bit of a crush,” he reflects fondly. But as he continues, his respect for the fallen star is irrefutable. “Adrienne was such a strong personality. Everyone really loved her.”

He, as well as the other cast members also rejoice in the talents of Russell and her ability to carry this charming film. Fillion lights up when he speaks of his co-star. “Keri was wonderful to work with. She was so sweet.”

So what's next for the courageous cast of Waitress ? Well, Sisto has back-to-back projects coming up, including a joint effort with hot-property, indie film producer, Amy Hobby ( Secretary ).

Russell will act opposite Robin Williams in August Rush . She will also appear in screenwriter David Auburn's directorial effort, The Girl in the Park , alongside Sigourney Weaver.

Fillion will also grace the big screen this year in White Noise 2: The Light .

Hines continues to delight fans of her character on HBO's “Curb Your Enthusiasm” by portraying the stable spouse of wacky star, Larry David. “It's definitely coming back for another season,” she states, matter-of-factly.

Then, there's The Grand . In this improvisational comedy about poker tournaments, Hines mixes it up at bit, playing the wife of Ray Romano. David Cross (“Arrested Development”) and American Pie's Shannon Elizabeth will also make appearances.

Still, no matter where this ensemble cast's careers take them, it's safe to assume that Shelly will always rest somewhere in their collective conscience. Says Hines, “Looking back, how could you possibly know this is the last time you'd see that person?”

Luckily she's only partly right. Thanks to Waitress and her previous cinematic achievements, Adrienne Shelly may be gone, but she will never be forgotten.

Waitress releases in select theaters May 2.