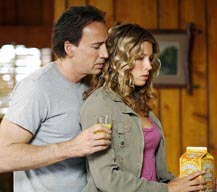 Movies about time travel make my head spin, and Next is no different. These movies, with their constant flash-forwards, flashbacks and non-linear storytelling often give me a throbbing migraine.

The always-personable Nicolas Cage plays Cris Johnson, a man who can see into the future, or more specifically, his future. Johnson is limited to seeing only two minutes into the future; that is, until he meets the lovely Liz, played by Jessica Biel. For some reason with Liz, he can see further into the future.

I would've never thought to pair up Cage and Biel; but then again, I never imagined Cage and Eva Mendes would work in Ghost Rider , either. Cage and Biel have genuine chemistry in this film. Beyond all of Biel's natural assets, she creates a character with more depth and vulnerability than any we have seen from her thus far.

Cage maintains his svelte superhero form, not to mention that big smile, those steely eyes and that gaze that always makes me think he somehow channels Humphrey Bogart in his performances.

Julianne Moore is also very effective, playing tough-as-nails FBI Agent Callie Ferris. Ferris blackmails Johnson into helping her. She wants to use his skills to help find a nuclear bomb that terrorists have planted somewhere in Los Angeles. Her motives are good, but she's not very nice about it.

In the end, Johnson agrees to help because it's the only way he can save Liz.

All the jumping around in time makes your head spin; but the filmmakers actually infuse a lot of humor into the sequences. One of my favorite examples is when Cage's character keeps trying out possible pick-up lines in order to initially woo Liz.