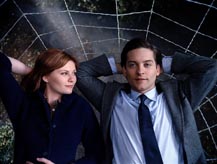 Give yourself a pink wedge. When it comes to comic book crimefighters, it seems the third time is never the charm.

Whether it's a change in cast, a new director, or a lack of worthwhile villains, number three usually comes out smelling like Number Two, effectively killing the franchise in the process. Well, your Spidey sense should be tingling because even your favorite webslinger fails to defeat the nemesis of superhero film history in the overlong and overwrought Spider-Man 3 .

The film picks up right where Spider-Man 2 left off: Peter Parker (Tobey Maguire) and Mary Jane Watson (Kirsten Dunst) are in love, Spiderman has earned the admiration and trust of New York and Harry Osborn (James Franco) readies himself as the heir apparent to the Green Goblin. Added to the villainous mix are bad guys Sandman (Thomas Hayden Church), unscrupulous photographer Eddie Brock (Topher Grace) and a blob of black alien parasitic goo known as Venom.

To say that Spider-Man 3 reunites the cast of the previous installments is an understatement: the film brings back every last character, including some of the dead ones, from the first two films. Even Spiderman creator Stan Lee, normally relegated to silent cameos, finally gets a couple of lines this time around.

But despite serving their third tour of duty, you won't sense any cast fatigue; this is the best-acted film of the three. Maguire digs deep to handle all that's thrown at Parker, from his deteriorating relationship with Mary Jane to his wild turn as the vengeful and comically arrogant black-suited Spidey.

Dunst brings the once bubbly M.J. into troubled adulthood with a believability and seriousness rarely found in summer action flicks. Even Franco, who often strayed into histrionics as the angry orphan in Spider-Man 2 , finally seems to have found a comfort zone with a more nuanced Harry.

Where the web unravels for Spider-Man 3 is in its flawed script. The film is the most comic book-y of the three, relying on a cheesy opening voiceover and convenient coincidences to get the action going.

To really get to the root of the problem, we have to flashback to 1992's Batman Returns . Including both the Penguin and Catwoman, it was the first superhero film to incorporate multiple villains in an attempt to ratchet up the blockbuster appeal.

The genre has been hampered by this formula ever since, and Spider-Man 3 may be its most hapless victim to date. Involving no less than three bad guys, two heroines and about seven different storylines, the film weaves a tangled mess that fights against itself to achieve any sort of momentum or narrative thrust.

Had all the plotlines been guided by one unifying theme, it might have had a chance, but Spider-Man 3 changes gears so many times that it can't decide whether its about learning to love, learning to forgive or learning to find your true self. In fact, there's so much damn learning going on that you forget what caused all the characters' problems in the first place. To this disjointed, stop-and-start mix, add in endless references to the previous films, and you start to feel like you're watching a string of deleted scenes from the Spider-Man 2 DVD.

Director and co-writer Sam Raimi clearly tries to end the franchise with a bang. Everything screams “last of the trilogy,” from its exhaustive special effect sequences right down to its Return of the King -esque never-ending ending.

With an ass-numbing two hours and 20 minutes to work with, the film does deliver an abundant share of satisfying moments. (For my money, the birth of Sandman is the best and most inspired scene in the film.) But ultimately, in a vain attempt to give the audience the most epic Spidey to date, Spider-Man 3 ignores the most important rule of them all: Leave them wanting more.