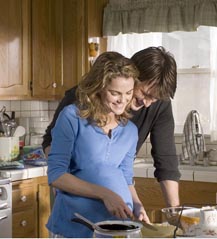 In Waitress , a whimsical feature film by writer, director and actress Adrienne Shelly, the charming sensibilities and affecting offbeat personalities that occupy a small, southern town are affectionately displayed.

Centered on the trials of the waitress/pie-maker impresario Jenna, played most delightfully by Keri Russell, Waitress is filled with the real-life antagonisms and pie-making dreams of a woman aching to break free.

The “I Hate My Husband” pie is just one of a myriad of recipes that she creates as a show of her emotions: “You take bittersweet chocolate and don't sweeten it, you make it into a pudding and drown it in caramel,” she narrates. The subsequent “I Don't Want Earl's Baby” pie gives an even clearer picture of her home life with Earl (Jeremy Sisto), the husband responsible for her unwanted pregnancy.

She does find some comfort from her bleak situation through her job at the local pie restaurant. There, she indulges her baking skills and freely confides in her colorful co-workers, Becky (Cheryl Hines) and Dawn (Adrienne Shelly). Their quirky and inventive attitudes support Jenna's bubbling aspirations, as well as the film's pervading comedic flair.

Waitress' charm doesn't stop at the pie shop; instead, it leads into the doors of the town's newcomer Dr. Pomatter (Nathan Fillion). He's not only Jenna's especially amusing obstetrician, but also the inspiration behind her “I Can't Have No Affair Because It's Wrong and I Don't Want Earl to Kill Me” pie: “Vanilla custard with banana. Hold the banana...”

His alluring awkwardness, coupled with her dry humor, give way to an adorable and undeniable chemistry. That attraction, however, is complicated by more paramount matters, like her unborn child. Although Jenna loathes the idea of becoming a mother, it's motherhood that ultimately comes to define the key ingredient to resolving the issues that obstruct her from her happiness.

Shelly, the main ingredient of Waitress' cohesive and clever production will unfortunately not have the chance to see the public reaction to her work. Shelly was found dead in her New York City office in November of last year, and police have since charged a construction worker in the building with her murder.

The posthumous release of Waitress will nevertheless resonate as a unique and impressive cinematic achievement for 2007 and mark the pinnacle of Shelly's long and varied career in entertainment.