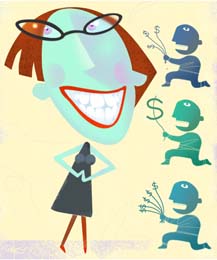 The only downside to working from home is that I'm spending more time by myself than anyone should. Sure, I find myself entertaining (at times), but I can only take so much “Weez Time.” Even Luke Skywalker got to hang out with Yoda when he went by himself to Dagobah for Jedi training.

So I think my decision to sign up for a speed-dating event is as motivated by my need to just get out of the house and make some new friends as it is my need to try to have a rendezvous of a sophisticated nature. That's not to say that speed dating isn't enjoyable in its own goofy, embarrassing little way. But I've gone to several events, and the results have been less than stellar.

For those of you who don't know what speed dating is, there are 20 men and 20 women. The women are all seated at little tables. Each guy moves down the line for about a three-minute “date.”

After all 20 dates are over, you select the ones you'd like to see again, go home and enter them online. Next day, after everyone's sent in their picks, you get an e-mail informing you of any mutual matches.

First time I went to one, there were a lot of things I enjoyed. I liked meeting 20 strangers and the fact that none of them worked in entertainment. I've found that people who don't work in entertainment find it easier to talk about real life instead of weekend movie grosses.

I probably circled “yes” for three-fourths of the women I met that first night. I was on the fence about a lot of them, but I ultimately decided that three minutes just wasn't enough time to make any rash judgments and that it was best to fire as many shots as possible, in hopes of hitting more targets.

The only unequivocal “no's” for me were the ones who came out and asked if I made a lot of money. As soon as those words came out their mouths, it was amazing how my perception of them changed. It was like these beautiful, sexy girls morphed right before my eyes into unappealing shrews.

Inversely, the girls that didn't catch my eye at first became more attractive when they started to show their personalities. It reminded me of a piece of advice given to me by a former co-worker. She used to say, “When you see that girl at a party, the one who catches your eye ... go up and introduce yourself to the girl who walks in right after her.”

At the evening's end, I felt like it was a success. So you can only imagine how disappointed, nay, flabbergasted I was when I logged on a couple days later and found that I had not one match.

There's no need to dwell on what I said or didn't say that left me with no match-ups. Some tell me that in order to get results, you have to go in there and really pitch the hell out of yourself in under three minutes. I admit, I'm not the equivalent of a movie trailer, but I wasn't ready to give up because even though the outcome sucked.

I opted to make some changes for the next event. The first thing I decided was to go to a speed-dating party for the older age group.

First event I went to was for 24 to 34 year-olds. I decided to do the event for 35 to 45 year olds on my next try, hoping that the women in their 30s would be a better fit for a character like me.

I was seriously considering a “scorched earth” policy for the next speed-dating party, planning to circle “no,” regardless of whether or not I liked any of the girls. I guess I wanted to quit before they could fire me; if I didn't get my hopes up, there was no way I could get burned.

My brother actually talked me out of that one. And he was right.

But the 35-45 event had its drawbacks. The big problem was that there are just fewer available women in that age group who even show up. Plus, there wasn't a lot of common ground between me and these women (many of them single mothers, some looking for a mate to help “share the load.”)

In any case, women like to go to these speed-dating parties in groups, which presents a unique little problem – you can't really flirt with some girl for three minutes, then move down the line and make a pass at her best friend. Well, you can, and many do, but one of the party hosts confessed that it makes things tricky for the girls when it's time to pick their matches.

It made things tricky for me, too. There were two girls who were friends with each other, both of them funny, interesting, sexy as hell.

Following the host's advice, I knew I should only pick one of them for a match. I didn't think I had a shot with the more attractive one so I picked the other.

The joke was on me, because the hotter one turned out to the one who wanted to see me again. (You have the option to let people know that you checked “yes,” even if they checked “no,” which just adds to the whole desperate vibe of these things.)

There's a really boring technical explanation why I couldn't just go ahead and contact her anyway. Not to mention I thought she might have found it a tad insulting. (That'd go over well: “I chose your friend over you, but she said no, so how's about a date?”)

And that was my speed-dating experience, in a nutshell. Am I nuts for giving this yet another try? We shall see ...