On a Cinco De Mayo Quest: For the Best Margaritas in Los Angeles

By Jonas Swyer and Alex Norris 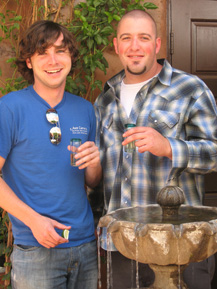 We really like drinking. While we do have other interests such as music, art, kayaking, mountain biking – pretty much anything they do in a genital herpes commercial – such activities are always more fun while holding a refreshing beverage.

For the record, we don't have genital herpes, but I really doubt even a savory margarita would help improve that situation. Well, maybe a blended coconut one.

With Cinco de Mayo fast approaching, we feel that it's our duty as professional drinkers to steer other West Side inhabiting Angelinos to our favorite margarita-filled, watering holes. While you won't see such locations on “Animal Planet,” you will see us at such locations.

Kay 'N Dave's Cantina is everything a margarita place should be. The Rancho Park location is truly gorgeous, and despite our group of four straight guys sipping on each other's margaritas … it's quite romantic. Not for us, of course, but hypothetically.

Every single margarita is spectacular: from the house special, Very Berry, prepared exquisitely by a busser (their secret margarita weapon before the evening bartenders show up), to the remarkably fruity blended Coconut and Guava ones (Yes, in this case, fruity is a double entendre.), to the unbelievably strong yet delicious Holmes.

The Holmes is their regular margarita; however, the real lime bits and intoxicating amount of tequila in the concoction bring to mind the famous actor John Holmes, who, to some, is the epitome of strong and intoxicating. Alas, he is not the namesake of the drink.

You really can't go wrong when ordering food here, either. The burritos, tamales, carne asada, desserts and appetizers are all spectacular. Even the complimentary homemade salsa is fresh and perfect to snack on while waiting for the next round of margaritas.

The staff at Kay 'N Dave's was friendly and outgoing, and Dave the owner actually stopped by the table to talk with us and make sure we were having a good time. Jordan, our waiter, and the unnamed busser with the magical margarita touch were also top notch.

I really can't recommend Kay 'N Dave's enough: the food, the drinks, everything. Go there, get to know Dave, and go back many more times.

It was a secure feeling to have a tatted-up, bald-headed bouncer as my drinking buddy. I walked into Baja Cantina with a bold swagger as my bodyguard-looking amigo lumbered behind casting stares into the eyes of troublemakers and louts, taunting them, without a word, to dare say anything slightly unpleasant to either of us.

We settled down outside under one of the heat lamps, looked around for girls to hit on and barked for the server to take our order. “Two Watermelon Margaritas, please, when you get a chance. Thanks.”

Don't be fooled by the schoolgirl-giggling coming from Jonas as he blushes with excitement over the thought of the fruity goodness en route. Or by the way my voice cracks when I see they have Banana Coladas. We are dangerous men.

Hemingway wrote books about men like us. We're full of bravado and testosterone and … OK, we're pansies. We didn't bark out our order, actually the server is a friend of ours. Her name is Julie and she's friggin' awesome. But it's nice to pretend now and then.

After the Watermelon Margaritas, we moved on to a plain one and the aforementioned Banana Colada. Neither of us is a fan of sweet and sour mix, so we typically avoid regular margaritas. But Baja's were pretty good. I think Julie may have watered them down for our sensitive palettes.

Every time I've been to Baja, the crowd has been rather attractive, though I may be biased because I work in a sausage factory. If you go, you might get lucky like we did and witness a guy in a Blazer/T-shirt combo getting walked out on by his girl.

Upon descending into the “cave room” at Don Antonio's, our waiter turned to Alex and me and remarked “es muy romantic, no?” Rather than lead him on, I told him that our dates would be arriving later. (Although I should have pointed out that their names would not be Lance and Bruce.)

Looking back, Alex's shirt with a happy cartoon alligator on it might have given the wrong impression … or right impression. We did get remarkable service (no double entendre there, I promise).

Proving that the waiter was wrong about us, an ex-girlfriend and I actually stopped at Don Antonio's just so she could drink enough margaritas to do something in a very uncomfortable place. For the record it wasn't the backseat of a Volkswagen. (Take a second to appreciate the Mallrats reference.)

The margaritas were fine, nothing out of the ordinary, and the food was quite good. There's a bar on one end of the restaurant, which gets pretty crowded on Wednesdays for $1 taco night.

The promotion attracts quite a varied crowd of West Siders: business people, families, locals and college students. If you want a seat on Wednesdays, you definitely have to get there early.

The main appeal of Don Antonio's, for me at least, is the chance to eat a delicious plate of enchiladas and crispy tacos while sipping on a margarita in a cave. Really, how often do you get to say that?

For the technologically advanced, don't worry. I got excellent reception on my cell phone even in the darkest corners of the cave.