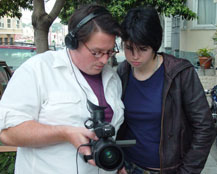 If the imaginations of David Cronenberg, Paul Verhoeven, or Robert Crumb are right up your alley, then the 2007 Silver Lake Film Festival is for you. It starts Thursday and highlights conspiracy films, new Indian cinema, erotica and live music.

One standout feature is the documentary, Red Without Blue from filmmakers Brooke Sebold, Benita Sills and Todd Sills. A winner at this year's Slamdance Film Festival, it sensitively tells the story of Montana-raised twins Mark and Alex Farley.

Their emotionally fraught closeness has weathered everything from divorce and child abuse (from outside the family) to drug use, forced separation and eventually one twin's coming out as gay and the other's decision to change gender. Sounds like something David Cronenberg would cook up, but there is a softer side to it all, as it takes great pains to speak about the bonds of family.

Another festival highlight is the Australian The Book of Revelation about the psychological aftermath of a male dancer's kidnapping, chaining and rape by three hooded women. Sounds like a family film, doesn't it?

How about the two-dimensional, puppets-and-dioramas feature called Dante's Inferno , a comic updating of the venerated journey through hell – voiced by Dermot Mulroney (as a snarky, city-dwelling modern Dante) and James Cromwell (as Virgil) – which names politicians, celebrities and corporations and damns the apparatus of our modern world.

If that's a little too rough for you, maybe you'd prefer the VC Filmfest, which spotlights pan-Asian movies in all their jovial foolishness. It includes a Japanese attempt of the Full Monty with Hula Girls , in which the Hawaiian dance rejuvenates a mining town; the Vietnamese martial arts film The Rebel , which paints the 1920s battle between the colonial resistance and government turncoats in spin kicks and knife play; and a wicked slice of high-art peek-a-boo in Viva , L.A.-based, half-Japanese filmmaker Anna Biller's feminist take on '70s sexploitation.

One of the festival's more wildly entertaining and pointed films is the South Korean box-office smash The King And The Clown , director Lee Jun-Ik's 16th century costume drama that pits two nomadic street satirists against the tyrannical king they bawdily, and dangerously, mock.