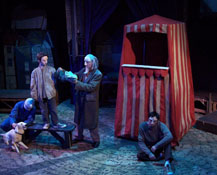 Based on the graphic novel by The Sandman comic creators Neil Gaiman (author) and Dave McKean (artist), “The Comical Tragedy or Tragical Comedy of Mr. Punch” merges straight theater with puppetry and multimedia effects to create an incredibly unique entertainment experience.

The Rogue Artists Ensemble is known for creating unconventional theatrical works that test the limits of the imagination. The players often utilize puppetry, so their marriage with “Mr. Punch” is a perfect union.

The Vertigo graphic novel of Mr. Punch was first published in 1995. It centered around people and their memories, and how they manifest in different ways. The bridge between memory and current reality becomes shorter and shorter until it doesn't seem to exist anymore.

In the theatrical version, we see twelve-year-old actor Dalton Kansas O' Dell as the Boy and do not realize until later that he is the memory of an adult male who does not necessarily remember things they way they actually happened. His memories become warped and maybe even more wicked than their reality.

Rogue Artistic Director Sean T. Cawelti not only directs the piece, he also adapted it from its original graphic novel form (with miles Taber and Rae Walker). A truly imaginative eye is Cawelti's, whose vision envelopes audiences in a dark place, both feared and revered by the child in each of us.

Cawelti says in the notes that adapting Mr. Punch has been a “labor of love” for almost two years now. The hard work has paid off.

Not having read the Punch and Judy comics myself, I still found the piece fascinating to watch and profound enough to be discussed long after the lights went down. I would have appreciated a bit more, perhaps, if the storyline was of a more linear style, as I had some difficulty following the plot at times.

But Patrick Rubio's mask design was quite impressive and enabled the audience to decipher the difference between memory and reality.

Kansas O' Dell as the Boy provided an honest performance amidst the enveloping mayhem. A standout presentation by Lucas Salazer as his Uncle Morton was full of sincere character and was appreciated with each entrance onto the stage.

The rest of the cast provided excellent performances as well, including Nina Silver as the Mermaid. Silver's character was charming and likeable. Her rapport with the audience was nice as well.

Joyce Hutter's puppet design was terrific and apparently true to the comic art. Overall, it felt as if the audience had entered into the graphic novel, not only as a voyeur, but as a participant.

The Punch puppet was accurate and amusing. (The voice of Mr. Punch, however, was appropriate for the character, but very shrill. It became slightly unnerving after a while.) At first glance it appeared child-friendly and harmless, but the twisted personality eventually seeped out.

Several times, the puppet of the Baby was thrown out into the audience for a group participatory game of catch. The puppets were, in fact, quite violent with each other, to the amusement of the theatrical “watchers” of the puppet show.

At one point, the puppets become full blown, life-size entities before our eyes. The experience was truly magical.

The cast seemed to be enjoying every moment of the show, as did the audience. This is a completely unique production and grown-up, scarred children everywhere will appreciate it.

Theater-goers can also visit the gallery and puppet display presented in the lobby and the alternate theatre.