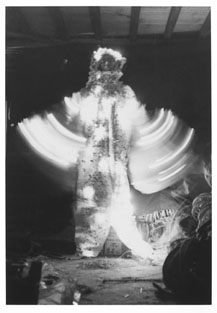 Full disclosure: the only reason I'm writing about this exhibit is because I'm in a hurry, and each time I mention the exhibition's name – Art, Anti-Art, Non-Art: Experimentations in the Public Sphere in Postwar Japan, 1950-1970 – it gets me that much closer to my goal of 300 words.

Kidding. Alright, half -kidding. Art, Anti-Art, Non-Art, even if it does fit nicely on a marquee, would still be worth discussing.

How does one conceptualize a world in which two atomic bombs decimated your country, showing that the basic material of life itself, the nucleus of an atom, could be split in two? Theorists argue that the dropping of Little Boy was the birth of postmodernism, which, at its core (some argue, there's no agreed upon definition) speaks about the fragmentation of culture; the atomic bomb showed that at our very essence, at a molecular level, we were not even whole.

This post-atomic culture gave rise to the subtext of the bomb in myriad animes and also, not surprisingly, created an experimental culture in the artwork of Japan which hitherto was composed of the classic woodprints and scroll paintings found in LACMA's Japanese Pavilion.

Art, Anti-Art, Non-Art showcases works under each of those rubrics, often times with pieces that flow (or flux) between all three. Gutai Bijutsu Ky ? kai, the “Concrete Art Association” with the slogan “Don't imitate others!” and “Engage in newness” was antithetical to the world's view of the conformist Japanese.

On display are pictures from their performance pieces, including Denki-fuku (Electric Dress) where a dress was made with a series of light bulbs that, when photographed, left a gossamer trail in its wake resembling the wings of an angel – but also alluding to the same trail left by a plane after dropping a bomb.