Lindsay Lohan: The Georgia Rule Star Grows Up, Gets Serious 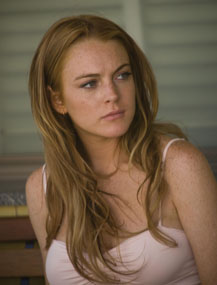 Unless you've been living under a rock for the past few years, you've probably been inundated with the diverse dramas of actress Lindsay Lohan. She's the jewel in the crown of tabloid journalism. Media coverage of her love life, family squabbles and health issues have often usurped more pertinent news of the day. (You know, like that war thingy over there in the desert?) Individuals are assuredly paying mortgages, cruising around town in brand new Beemers and putting progeny through expensive private schools – all on the head of Lohan. So what's a girl to do? Keep on living, that's what!

To Lohan's credit, she's managed to roll with the punches like any good Irish lass would. That inner strength and fire are necessary to battle the ongoing “build 'em up to knock 'em down” nonsense that Hollywood tends to put its stars through. In this world of momentary hotness vs. disposable afterthoughts, this young 20-something still manages to walk the fine line between serious actress and pop-culture demigod.

She parties 'til dawn, swears like a sailor and drives her mother crazy. That's when mommy dearest decides it's time for some tough love.

As much as it bothers her to return to her childhood home, Lilly hauls her bad girl daughter off to the Idaho residence run by her mother, and Rachel's grandmother, Georgia (Jane Fonda). Cue: the fireworks.

Fonda's character is by no means the sweet little ol' granny that bakes cookies and sends a check for $10 in the mail on birthdays. Nope. She's hardcore. Her rules and regulations become the edict that will straighten Rachel out and ultimately bring these three generations of women together.

“The script reminded me of Ann-Margaret's character in one of my favorite films, Kitten With a Whip ,” says Lohan of her role in Georgia Rule . “She was very Lolita -esque as well.”

It seems that the actress chooses parts that are not only therapeutic for herself, but for others who view them. “I think it's important,” she says, “to play a character so any girl or boy that has ever gone through a situation like this can hopefully learn from.”

As the first person attached to Georgia Rule , the rest of the production was then situated around Lohan's association with the work. Rule's director, Garry Marshall, who cast Julia Roberts her acclaimed role in Pretty Woman , as well as hand-picking Anne Hathaway for her part in the Princess Diaries franchise, seems to have the magic touch when it comes to discovering and nurturing talent.

The other actors in Georgia Rule couldn't agree more. Fonda raves, “Lindsay's raw and has an ability to access her emotions that's very beautiful. She made me cry several times when I gave her the offstage lines; she's very moving.”

There was a wide array of buzz surrounding this picture when its cast was first announced. Huffman, a regular on the hit series “Desperate Housewives” was a hot property. Fonda had just starred in her blockbuster comeback film Monster-in-Law opposite Jennifer Lopez.

And Lohan – ever the “it-girl” – was about to make a splash in Robert Altman's final film , A Prairie Home Companion . Her co-star in that film Meryl Streep sang her praises to any reporter that would listen. People were finally starting to notice this young starlet for her true gifts and contributions and not because of her supposed bad behavior.

That's when the PR nightmare to end all nightmares occurred. During production on Georgia Rule , producer James G. Robinson's now infamous and scathing correspondence to Lohan in June 2006 sent shock waves through Tinseltown and threatened the future of this young star's affiliation with the film.

In response to the letter, which accused her daughter of acting like a spoiled child, Lohan's mother and manager, Dina, was quick to defend her: “Maybe he has personal issues with whomever, and it came out with my child. I don't know him. I can't judge him. I don't think it was a smart thing to do to a young girl.”

Once the smoke cleared, the younger Lohan was back on set and nary another controversy materialized. To some, it seemed that the Lohan juggernaut had officially been annihilated.

Many speculated that the actress's purported party girl antics had finally caught up with her. But Dina Lohan had raised a great point.

It is so simple to look at Lindsay Lohan and have high expectations of her. Because she is so multi-faceted in her talents, it's even easier to forget that she's essentially just a kid.

There are tons of young men and women Lohan's age that have called out on the job due to illness or have experienced a difficult breakup or have spent a night out with friends clubbing. The only difference is they don't have to do it in the glare of the paparazzi's flashbulbs. At the end of the day, she's just a girl living her life the best way she knows how.

That life has been a spectacular one. At the tender age of three, Lohan began her career as a Ford Model. Her face graced look-books and ads for Donna Karan as well as Calvin Klein.

Throughout her childhood, she appeared in commercials and ads, ranging from Vogue magazine spreads to spots for Toys “R” Us and Jell-O. At the age of nine, Lohan followed predecessors like Demi Moore and Sarah Michelle Gellar into the world of soap operas by appearing on daytime TV's “Another World.” It's been reported that she was given more dialog than most other child actors on similar programs.

Hollywood came calling shortly thereafter, and Lohan was cast in the Disney remake of The Parent Trap . From here, she acted alongside legendary talents like Bette Midler on her short-lived series, “Bette,” as well as playing Jamie Lee Curtis's daughter in Freaky Friday .

Next, she appeared in 2004's Confessions of a Teenage Drama Queen . Her true breakout performance came that same year when she took the lead in Mean Girls . Her portrayal of Cady Herron was not only a tour-de-force, but it proved this young actress could carry a film all the way to box office success.

Lohan was delightful in Disney's Herbie Fully Loaded (2005) , opposite Mac pitchman Justin Long. Later came roles in Just My Luck (2006) and the aforementioned A Prairie Home Companion (2006). Lohan has hosted the venerated sketch comedy show “Saturday Night Live” twice and has gone on to appear in numerous other projects like Bobby and Chapter 27 with reported former beau, Jared Leto.

She is also an accomplished recording artist. Her voice can be heard on tracks in movies like Freaky Friday and the Princess Diaries 2: Royal Engagement . In 2005, her debut album, Speak , went platinum. Lohan even directed the video for “Confessions of a Broken Heart (Daughter to Father)” which was the first single from her second album, A Little More Personal (Raw) .

All these achievements, however, have come at a cost. Rumored exhaustion and dehydration sent tongues wagging at the possibility of a meltdown.

In January 2006, Lohan copped to a bit of bad behavior during a feature written about her in Vanity Fair magazine. This was enough fodder to fuel the rampant speculation that Lohan had regressed into l'enfant terrible .

Gossip went into overdrive, and suddenly the name Lindsay Lohan became synonymous with conjecture and late-night TV monologues. Subsequent injuries like a sprained wrist in 2006 and a highly publicized rehab stay in early 2007 did very little to eradicate such talk.

But these hurdles only strengthen the actress's resolve. This year, Lohan plans to come back bigger and better than ever.

With an eye toward the future, she looks forward to recording a third album and perfecting herself as a true musician. “I'm fucking serious this time!” she reveals. “I want to do a tour like Madonna and do what Britney Spears was doing. Working with Pharrell Williams, Timbaland and Justin Timberlake.”

Lohan also has a starring role in the upcoming film, I Know Who Killed Me , opposite Julia Ormond ( Smilla's Sense of Snow ). But the biggest new event coming up is her impending 21st birthday celebration.

During a recent interview with Ellen Degeneres, she proudly proclaimed, “I'm going to milk it because it's a big birthday.” The festivities will reportedly be split between a private dinner party in Malibu with friends and family and a much flashier bash in Las Vegas.

But surely the best thing about this birthday for Lohan is going to be her entrance into adulthood and closing the door on a tumultuous childhood. Here's hoping her next few projects become happy souvenirs of a very eventful year.

Georgia Rule releases in theaters on May 11.