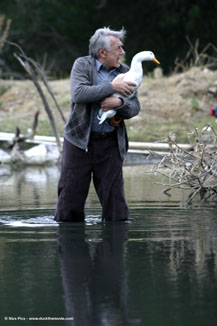 Duck is a story set in the near future of Los Angeles. A cautionary tale, the film foretells a future in which the last city park is closed to the public.

Arthur (the legendary Philip Baker Hall) is a retired history professor who has outlived his time and place, and following the death of his wife, feels he has no reason left to live. After being kicked out of his apartment by an insensitive landlord and exhausting all other options and means, Arthur decides to end it all with an overdose of pills.

Just as he's about to commit suicide in the park, alongside where his wife and son are buried, Joe, an orphaned duckling, comes waddling into his life. We learn Joe apparently lost his entire family when the troop was crossing the road.

It seems a car came along and the rest of the gaggle forgot to … duck. So now Joe thinks the old man is his mom. Arthur finds a reason to live in taking care of the cute little duckling, and the two homeless buddies make their way across the mostly heartless desert that is Los Angeles 2009.

Baker Hall's talents add much weight to the film. I can't say that he carries it, however; because the duck is just so damn good. The on-screen relationship between the two is truly a sight to see; their chemistry, uncanny.

The problem with Duck is that it gets too bogged down with preachy dialogue and mostly unbelievable characters. There are some notable exceptions. Noel Gugliemi as “The Lord of the Garbage” and veteran actor Bill Cobbs, as the kind and wise blind man, are very effective. Duck is a noble effort, but unfortunately, much of the dialogue comes off as more of a lecture than a narrative story.

Where Duck succeeds is in the relationship between Arthur and Joe; both man and bird are amazing on screen. In the end, however, Duck merely waddles along to its inevitable conclusion, when it should have soared.