Ponette: Its Journey is a Beautiful as its Music 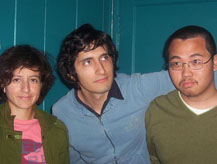 Beauty can be a subjective thing. Some find it in an attractive face; for others, it manifests itself in nature's splendor. For those yet to discover true beauty, I offer you Ponette.

The band of three, who shares its name with the 1996 award-winning French film, is fast solidifying itself as “one to watch” in the L.A. music scene. Since January 2006, the trio has been diligently writing songs and honing its craft by playing a wide array of venues throughout the Southland.

Founding members Dat Nguyen and Jose Oseguera officially list the French Kicks, Shannon Wright and Stina Nordenstam as artists who inspire them. Yet their sweet-sounding melodies and haunting instrumental experimentation are more reminiscent of groups like Death Cab for Cutie, Sonic Youth and the Innocence Mission.

As a duo, Nguyen and Oseguera first got their start in the band Phobia Wrecked Her, modeled on a communal idea that everyone would sing and play.

After splitting from that project, Nguyen and Oseguera reassembled as Ponette, and hit the open mic night circuit with a vengeance. They tested their first few songs at local coffee houses like Bliss Cafe in Hollywood.

These early shows allowed the band to set its sights on playing larger venues, as well as adding the musical talents of a percussionist. After a long and torturous search, Ponette found a kindred spirit in drummer Kim Rodriguez.

This Yucaipa native's soft-spoken manner is a perfect match for the shy and humble personalities already present in the group. Her own musical influences, bands like Interpol and No Doubt, lend a sharp contrast to the prettiness that is often associated with Ponette's music.

So much so that Rodriguez now furnishes backing vocals regularly during performances, which has added a rich, new dimension to the band's catalog of songs.

Rodriguez shines in “Still Here,” playing double-duty as lead singer while accompanying on the drums. When asked how she would become so prominently featured on the song, she modestly offers, “Actually, I had that song before I joined them. They just sort of added their own thing in there.”

Oseguera is frank and sincere about his respect and admiration for his newest band mate. “I think she adds a variety. It's not just a guy band; it's now a guy/girl band. It makes it more interesting.”

Almost immediately following the change in lineup, Ponette's dream of playing bigger clubs came to fruition. The group booked several dates at the Gig in Hollywood, where Macaulay Culkin, Mila Kunis (“That '70s Show”), and Amanda Seyfried (“Big Love”) were in attendance one night.

From there, the band members successfully made a name for themselves throughout the San Fernando Valley, as well as the Sunset Strip, playing the world-renowned Whisky a Go-Go. But Ponette's true crowning achievement occurred recently at its first show at the Knitting Factory in Hollywood.

For the friends and family who supported the musicians each step of the way, it was a truly proud moment. But for the band, it was a chance to give love back to those who have championed its talents all along.

“For anybody who wants to take a piece of Ponette home,” announced Oseguera at the show, “we have free T-shirts in medium, large and extra-large, for those of you who are extra special."

Perhaps the excitement surrounding this trio is that it dares to be different. The three construct their sound to lilt and flow, much in the same way that the late Jeff Buckley did with his music.

Songs like “L.I.A.R” and “In Time” continue to expose a level of maturity not necessarily synonymous with college kids from the Valley. Nguyen feels that the industry is ripe and ready for a band like Ponette.

Regarding the future of experimental music, he says, “There'll probably be more noise bands. Where I'd like it to go is a different story. I'd like it to be more melodic, more sweet. I guess more delicate.”

Modest declarations aside, the members of Ponette keep a stern focus on their future goals. They continue to book shows as well as support other local talent like indie rock groups Maria and Maz Paz.

“We want to play in front of lots of people,” says Oseguera. “Tour the West Coast and eventually the East, and everywhere in between.”

Rodriguez concurs: “I just want to play music for the rest of my life.”

With luck, talent and tenacity, the band is sure to get its wish.

Ponette will perform May 12 at House of Brews in San Fernando and June 3 at Paladino's in Tarzana. For more information, visit www.myspace.com/thebandponette.