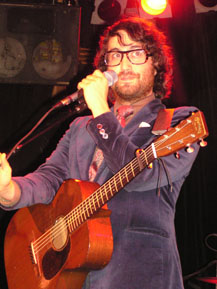 Screaming shout-outs to friends and admittedly happy to be in Los Angeles, Sean Lennon walked onto the Roxy stage for an intimate performance of songs from his most recent album, Friendly Fire . Apologizing for his self-described “mangy” look – an overgrown five o'clock shadow and bed head hair – it seemed only to intensify Lennon's charm.

Singing songs such as “Dead Meat” and “Friendly Fire,” Lennon's lyrics spoke of the pain and anger felt when his boyhood friend Max LeRoy was found cheating with his girlfriend of four years, actress Bijou Phillips. With LeRoy's recent passing, he ironically dedicated the album to his friend, inspiring Lennon to vent his mixed emotions through music. In response, the audience was captivated in a way that had fans either staring into space or swaying to the music.

Show highlights included the performance of “Parachute,” an example of Lennon's best work to date. Often closing his eyes sleepily while singing, the atmosphere took on a similar dreamlike state with an otherworldly feel reminiscent of his father's solo work. But take note: Sean Lennon stands as an artist where comparisons need not be made.

Between songs, Lennon revealed a side that's not often seen in the media; he's a funny guy. Spilling stories from a strange yet memorable Kool Keith concert to his opinion on Don Imus, Lennon spoke to fans as if they were old friends, laughing along with them to his own recollections. Band members also enjoyed the entertainment, which included Yuka Honda of Cibo Matto, another band Lennon is a proud a member of.

Lennon concluded his show with an encore, solo performance of “Tomorrow,” playing acoustically on his guitar. Although some may be turned off by the lack of “rock adrenaline” in his show, others can agree that the quiet excitement Lennon brings with his music is more than enough.
Article posted on 5/8/2007
This article has been viewed 1220 times.